Maxwell Kofi Owusu, who refereed the matchday 25 game between Hearts of Oak and Elmina Sharks, has been suspended by the Ghana Football Association (GFA) for the rest of the season.

The decision was taken by the match review panel of the GFA after receiving official complaints from Elmina Sharks.

Owusu admitted on social media after the game that he made some calls he wasn’t proud of.

Sharks complained that Assistant Referee 1 (Tijani Mohammed) disallowed a good goal scored by Elmina Sharks and flagged for an offside in the 31st minute of the first half.

The club also stated that in the 20th minute of the first half, Referee Maxwell Kofi Owusu ignored a foul for Elmina Sharks in the penalty area.

According to Elmina Sharks, assistant referee 1 (Tijani Mohammed) flagged for a goal kick for Hearts of Oak instead of a corner for Elmina Sharks in the 35th minute of the 1st half.

The club further stated that the referee (Maxwell Kofi Owusu) awarded a penalty kick to Hearts of Oak (handball) though the ball hit the shoulder of the player and not his hand. The player was subsequently shown a red card for the wrong decision in the 41st minute.

The Referee and his assistant referee 2 were also accused of overlooking a serious foul play on an Elmina Sharks player in the 60th minute of the 2nd half as well as refusing to rule a goal that was scored in the 78th minute as offside.

After video review, here’s the verdict by the Match Review Panel:

Referee Maxwell Kofi Owusu is suspended from all football related activities for the rest of the football season after being found to have erred in awarding a penalty to Hearts of Oak, ignoring the flag of the assistant referee to indicate the movement of the goalkeeper and for sending off player number 20 instead of player number 25 of Elmina Sharks for the offence deemed to have been committed. 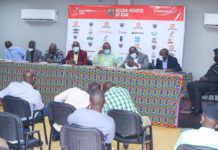