Former President Jerry John Rawlings and the Agbotui family have extended their heartfelt gratitude to all individuals and institutions present at the burial of Victoria Agbotui.

They expressed appreciation to all parties that contributed in diverse ways towards the successful funeral rites and burial last Saturday.

The family has extended special gratitude to President Nana Akufo-Addo and other state officials for their presence and participation.

The burial service of Madam Agbotui, mother of former President Rawlings took place at the forecourt of the State House in Accra.

After the one hour service, the body was conveyed to Dzelukope in the Volta Region for interment.

With the provision of security personnel by the Inspector-General of Police, processes involved in commuting from Accra to Dzelukope were coordinated efficiently and effectively.

The Agbotui family have apologised to all for difficulties and challenges faced due to time constraint and miscommunication. 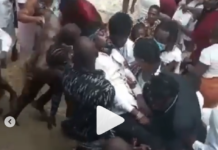