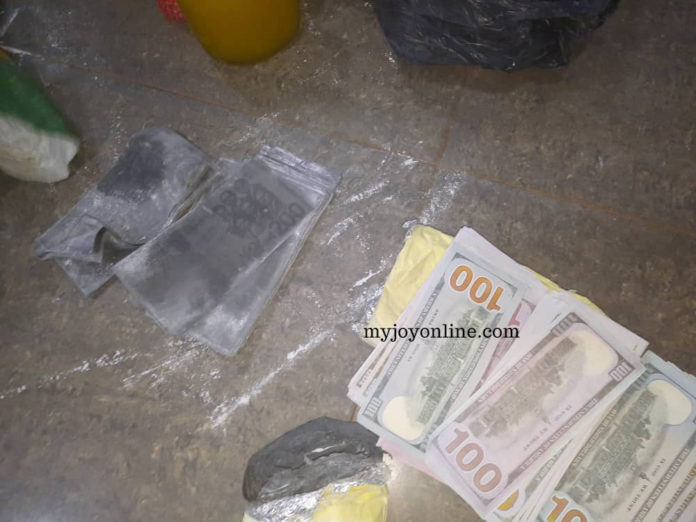 The Northern Regional Police have arrested three persons in possession of fake dollar bills in a hotel in the capital, Tamale.

The suspects are to be prosecuted for possession of fake currency.

According to the Northern Regional Police Crime Officer, Superintendent Bernard Baba Ananga, the three, Inusah Kadri and Mohammed Martin, residents of Tamale, and an Ivorian National, Ngondju Nazaire-Kaime, were found with $20,000 and GH¢25,000.

He said some other black papers cut into sizes suspected to be for the printing of the fake currency notes, the currency printing machine, some powdered substance and chemical were also found in the hotel room.

The Northern Regional Police Crime Officer said the locals, Inusah and Mohammed oversaw the immigration of Ngondju into the area.

They camped him at the Moonlight Hotel to produce the money. He said Ngondju had agreed to come after the two contacted him on Facebook.

Superintendent Ananga said the two paid him GH¢25,000 to print the money. He said Ngondju had printed some and told them to wait for them to turn into real dollars by the following day.

He stated that the two, suspecting Ngondju wanted to swindle them, decided that they all wait until the money changes into dollars.

He added that the Ivorian national, sensing his life was in danger tried contacting someone outside the hotel.

Superintendent Ananga said the Police had been tipped-off so they moved in to arrest the three suspects.

He explained that though the Police were yet to ascertain the total amount of dollar notes he was due to print for the two, the bag containing the papers was huge.

Superintendent Ananga said they believe it is a syndicate, considering the number of reports of fake currency transactions received in the area.

He said the three have been remanded into Police custody and will reappear in court in two weeks.

5 Chinese nationals arrested in connection with missing excavators at Ellembelle