The Member of Parliament for Tema East and Deputy Transport Minister, Nii Kwartei Titus-Glover has recounted his near-death experience when an Antrak airline he was travelling in, developed a fault mid-air.

The aeroplane was en route from Tamale in the Northern Region to the capital, Accra, when the incident occurred with frightened passengers praying and screaming for their dear lives.

The incident occurred in 2014 but the Deputy Transport Minister on Adom FM’s morning show Dwaso Nsem Monday said he still has nightmares when he thinks about it.

In his case, he said the pilot successfully navigated the faulty aircraft back to Tamale after one of the engines of the aircraft with registration number EC-KUL, caught fire some few minutes after take-off.

Titus-Glover shared the experience while discussing the near-fatal accident of President Akufo-Addo with the Presidential jet in Washington.

According to reports, the incident occurred after one of the engines of the aircraft went off few minutes after takeoff on their way to Ghana from Washington.

The aircraft had to fly around a number of times to burn fuel before being assisted to land.

President Akufo-Addo said the president and his entourage came through on a South African Airways flight.

Commenting on the issue, Titus-Glover thanked God for saving President Akufo-Addo and his entourage from the fatal accident.

“We serve a living God and I know President you are not going to die. You will serve and declare the works of the Lord” he added. 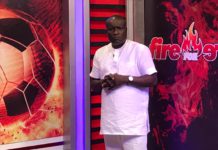