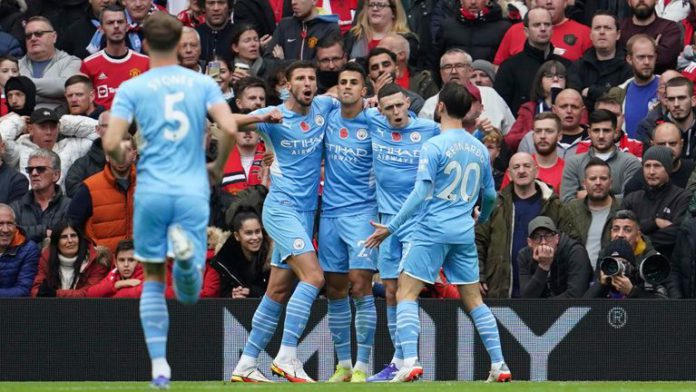 Manchester City cruised to a 2-0 win over an abject Manchester United at Old Trafford to pile the pressure back on Ole Gunnar Solskjaer.

United, without the injured Raphael Varane and Edinson Cavani, struggled to string three passes together in the opening exchanges and looked clueless on how to handle the visitors’ pressing.

And they fell behind after just seven minutes when João Cancelo’s cross was diverted into his own net by a diving Eric Bailly.

It was comfortable for the reigning Premier League champions as Pep Guardiola’s puffer jacket with David De Gea making brilliant saves to keep out Gabriel Jesus’s goalbound strike, an effort from Kevin De Bruyne and two shots from Cancelo.

City’s possession was rewarded on the stroke of half-time when Bernardo Silva converted Cancelo’s cross from a tight angle after Harry Maguire and Luke Shaw inexplicably switched off.

United’s only chance of note in the first period was a Cristiano Ronaldo volley which was saved by Ederson.

Solskjaer put on Jadon Sancho for Bailly at the break, switched to a back four and later brought on Marcus Rashford and Donny Van De Beek.

It resulted in them having more of the ball but still creating little with Bruno Fernandes anonymous and the game resembling a training match at times.

Phil Foden hit the post in the closing stages as City held on comfortably to take the spoils in the 186th derby to move up to second in the table while United stay fifth.