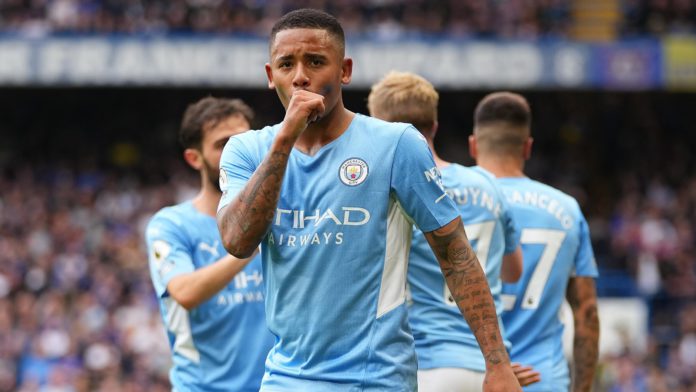 In a game where Pep Guardiola and Thomas Tuchel adopted very different approaches, it would be the visiting champions who would dominate the opening exchanges of both halves, controlling possession and dictating the tempo of the match as the darker Blues of the home side held firm in a solid 5-3-2 defensive shape.

Chelsea did what they could to hang in there: Antonio Rudiger and Cesar Azpilicueta were usually the ones throwing their bodies in the way of City shots in a first half where neither side actually registered a shot on target.

The hosts’ defiance was finally breached on 53 minutes: Gabriel Jesus making the most of a fortuitous break to hold off his man and strike into the far corner on the half turn, with a slice of luck on its way through thanks to a Jorginho deflection.

Tuchel’s men would have the ball in the back of the net at least once; Romelu Lukaku tucking away a Kai Havertz square ball, but the German was adjudged to have been offside from the initial cross-field pass from Andreas Christensen.

Jack Grealish forced an excellent save from the returning Edouard Mendy on the hour, and he would then provide the outside-of-the-boot cross that the Senegalese could only parry, needing a Thiago Silva last-ditch block on the line to stop Gabriel Jesus doubling both his and his team’s tally. The Chelsea goalkeeper would be called upon once more to halt the £100 million man on 82 minutes, as the former Aston Villa playmaker bore down on goal.

Chelsea opened up the game in search of an equaliser, making the match a more enticing encounter as a result, but it was all about City and a Guardiola masterclass in attacking football, having no fear when visiting the home of the European champions.