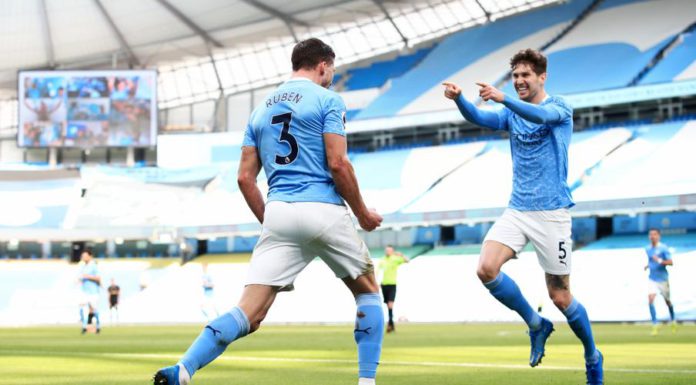 Manchester City continued their Premier League title charge as they record a 20th straight win in all competitions with a 2-1 win over high-flying West Ham at the Etihad Stadium.

The hosts started slowly but stole in front on 30 minutes when Ruben Dias nodded in his first Citizens goal from Kevin de Bruyne’s sublime right-wing cross.

West Ham’s gameplan to frustrate the league leaders shifted in the latter part of the half and they got their reward prior to the interval when Michail Antonio touched home Jesse Lingard’s shot. It was the first goal City had conceded on home turf since December 15.

Pep Guardiola had handed a first Premier League start since October to record scorer, Sergio Aguero, but he struggled to make an impact before being substituted just past the hour.

Instead, it was left to another centre back to steer City back on the path to victory as John Stones calmly guided a first-time strike into the far corner from Riyad Mahrez’s pass 22 minutes from time.

Next up, City host Wolves on Tuesday prior to a crunch Manchester derby at home to United on Sunday. West Ham are not in action until Monday, March 8, when they host Leeds United.