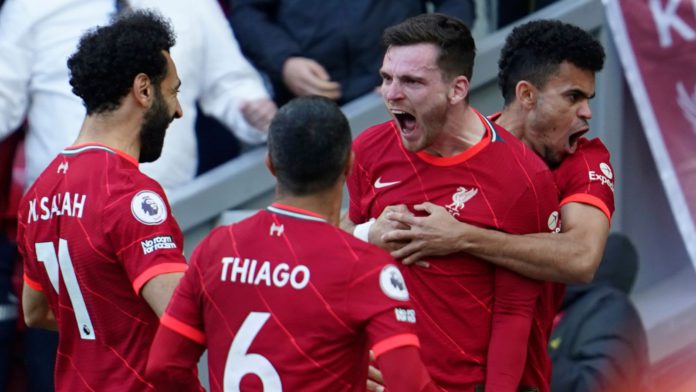 Liverpool moved back to within a point of Premier League leaders Manchester City following a hard-fought 2-0 win in a fiery Merseyside derby that further deepened Everton’s relegation fears.

Jurgen Klopp’s title-chasers were forced to be patient but eventually broke through the visitors’ rearguard action when Andy Robertson nodded in Mo Salah’s cross just past the hour.

Substitute Divock Origi, who had a hand in the opener, then notched his sixth goal in 10 outings against the Toffees to seal the points five minutes from time.

Everton had dropped into the bottom three ahead of kick off as a result of Burnley’s win over Wolves and they arrived with a game-plan to time-waste and frustrate the hosts with a well-drilled low block.

It appeared to work as Liverpool initially struggled to create much of note and failed to muster a shot on target in the first 45 minutes of a league match at Anfield for only the second time this season.

The lively Anthony Gordon had a penalty appeal waved away for the visitors early in the second period before Robertson’s breakthrough changed the complexion of the match and the hosts took control.

Liverpool will now switch focus to the first leg of their Champions League semi final at home to Villarreal on Wednesday prior to a trip to in-form Newcastle next Saturday. Everton host Chelsea next Sunday.