Gareth Bale scored twice and made another as Spurs thrash Burnley 4-0 in a scintillating display with the Welshman back to his best.

Spurs made a dream start as Bale netted inside 70 seconds, latching on to the end of Son Heung-Min’s teasing cross to stun the usually resilient Clarets.

And the hosts looked dangerous every time they went forward and doubled their lead 15 minutes later as Bale added an assist to his goal with a pinged cross-field pass to Harry Kane who smashed past a helpless Nick Pope.

A third goal looked inevitable as Spurs ran riot and Lucas Moura scored it after finding the ball at his feet following Sergio Reguilon’s cross, rifling past Pope from close range.

Burnley looked a better side in the second half but the hosts landed a killer blow just as the Clarets were finding their rhythm.

Son again turned provider as he found Bale in acres of space out right, before the Welshman cut inside and curled a wonderful effort into the corner for his second goal of the game.

Burnley were limited to series of long-range efforts as Matej Vydra did his best to get the visitors on the scoresheet.

But Tottenham kept their opponents out to add gloss to a brilliant attacking performance that sees them leapfrog Arsenal into eighth in the table. 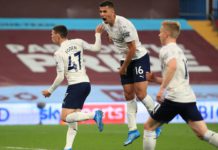