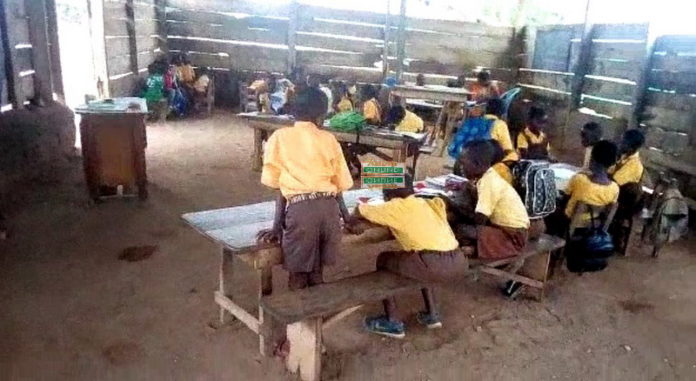 Pupils of Agona Bosompa M/A school near Agona Nyarkrom in the Agona West Municipality of the Central region are now forced to learn in a wooden church structure while others learn under cocoa sheds because their uncompleted school building has been abandoned.

Information gathered by Adom News revealed that a six-unit classroom project at the roofing stage, which was started by the previous government, is now rotting away after almost three years of a new government.

According to the General Secretary of the school’s Parent Teacher Association, Kojo Gura, most parents have withdrawn their wards from the school due to the deplorable nature of the building which poses as a death trap to the pupils.

In an interview with Adom News, the children said the environment is negatively affecting academic work in the school.

“We are forced to close early anytime it rains because we don’t have conducive shelter and have to share the wooden structure with goats and sheep. We will ask the government to help us complete the building,” they appealed.

Isaac Nyarko, a parent who disclosed he was part of the carpenters who started the roofing three years ago, appealed to the government to treat the matter with the urgency it deserves.

“All the woods on the building are rotten. We might be forced to withdraw all the children if something is not done quickly,” they said.