The Police in Kwesimintim have arrested five alleged notorious thieves who have been terrorizing residents within the Effia Kwesimentsim Municipality of the Western Region.

Three of the suspects – Joseph Ackah, Fredrick Ghartey and Kwabena Anokye – the police say, are most wanted and been on their radar for the past two years.

The rest are Kojo Baah and Simon Aidoo alias Tiger.

Kwesimintsim District Police Commander, Superintendent Peter Aidoo told journalists the suspected thieves had been stealing from the homes of residents at a time that they had left for work

He said crime scene investigation revealed they used pliers, car jacks, pinch bar and other sharp instruments to break into the rooms of their victims to steal in broad daylight.

He however cited one instance when a photographer was attacked and robbed by the suspects.

“On June 30 at about 10:30 pm the victim was returning from an event at Akroma Plaza where he had provided photography services to a client. He was attacked by Simon Aidoo, Kwabena Anokye and four others who are at large and robbed him off his camera and other items including his food in a pack” Supt. Aidoo said. 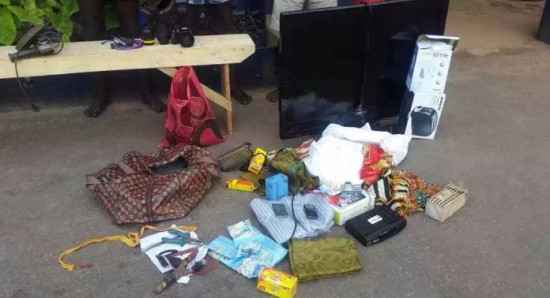 “Kwabena Anokye was involved in a similar robbery on May 18. For Fredrick Ghartey in all cases we are not able to get enough evidence but this time the stolen items were found in his room. Joseph Ackah’s notoriety is based on our intelligence that he terrorizes residents even in the full glare of the public” he added.

He said the five are being processed for court.

The Commander has pleaded with community leaders to assist the police to form community watchdogs to help in combating crime.