A Thai woman has admitted to throwing her newborn baby from a 17th floor window because her married boyfriend left her to return to his family.

Netchanok Nokyungtong, 20, told police she was devastated when her 40-year-old boyfriend abandoned her and returned to his family in South Korea after she told him she was pregnant
Soon after giving birth, she wrapped the baby boy in a plastic bag and threw him from her bedroom window.
A horrified witness told police that he saw a large object fall past his window on the fourth floor and hit the ground at around 5pm, and was shocked to find the baby boy on the ground when he ran downstairs to check.

He called police who found the baby wrapped in a green plastic bag with the umbilical cord still attached. His heart was not beating.
Officers checked CCTV and later arrested Nokyungtong who admitted throwing the baby out the window.

She said she had done so because her boyfriend ‘Kim’ from South Korea, already had a family and returned to them after finding out she was pregnant.
She told police that she gave birth ‘unexpectedly’ in the bathroom and opened the window and dropped her son outside in the Banglamung district of the city.

Police Colonel Apichai Khemphet, head of Pattaya Police, said Nokyungtong admitted to killing the baby and would be prosecuted after all the evidence had been gathered.
‘Miss Netchanok Nokyungtong gave birth in bathroom where blood was found on the floor. She said she was shocked and not ready for the birth.

‘The boyfriend is a married foreigner from South Korea who did not want to stay with her. She was heartbroken because he returned to his family. ‘She put the baby in a plastic bag and threw it out of the window and it died.’ 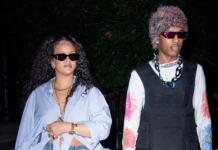 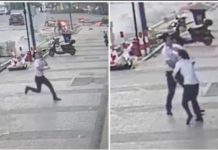 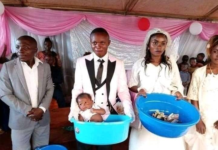