The second syndicate Adebayo Mudasiru and Rashid Abass said they bought human parts for N12, 000. They were arrested with dry and fresh human parts, including a human skull, flesh, teeth and four lizards in Totoro area of Abeokuta, the state capital.

The state police commissioner said the suspects were arrested after they were sighted with a suspicious bag.

“They specialized in killing people for the purpose of using human parts for rituals. A team of Federal SARS sighted two men on motorcycle with a suspicious bag and were forced to stop and be searched. Recovered from their bag were fresh and dry human parts’ the police boss said.

When interrogated, 36-year-old Mudasiru who claimed to be an Islamic cleric, said it was one of their former teachers who sold the human parts to them. He said they bought the human flesh, skull and about 12 teeth for N12, 000.

“We were coming from Itoku to buy some of the ingredients. We didn’t buy the human flesh at Itoku. We collected them from someone in Ijemo area of the town. We were aware of the contents. Human parts are used for money rituals. We actually wanted to use them for ourselves, to draw people’s attention to us and we have been in this job for about five years. We bought the parts from a cleric; the teeth are not costly. I don’t know how many but we bought them for N2, 000; we bought all the human parts, including the skull and flesh, for N12, 000. We went to an Islamic school in Ijaye area of Abeokuta and we have been doing this, though we didn’t learn this in the Islamic school. What we do is to burn the human parts, mix the charred remains with local soap and snail water and use it to bath. We haven’t done it before but that is what we were taught. We were taught to mix lizard, human parts, snail water and other ingredients, we don’t really know how the charms function but that is how we were taught” he said. 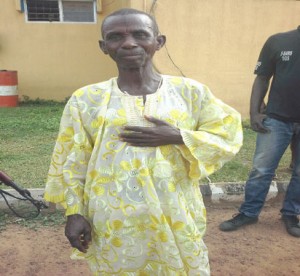 His accomplice, 33-year-old Abass, said: “It is the person who gave us the ingredients that gave us the human parts. He is the one who taught us the way to use them and it is for money ritual. It is the same day we collected it that we were arrested”