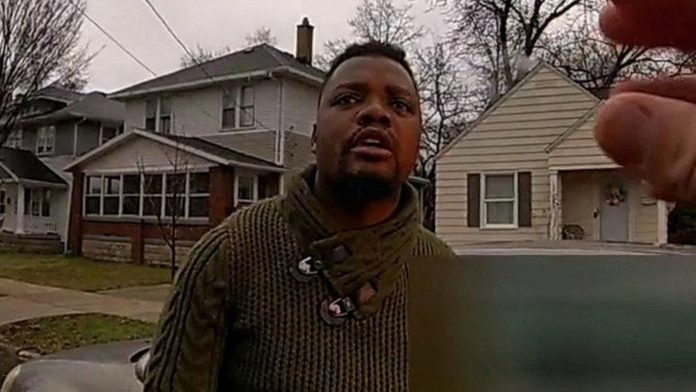 Police video has been released of a white officer fatally shooting a black man in the back of the head after a scuffle over a stun gun.

Footage of the 4 April incident in Grand Rapids, Michigan, shows Patrick Lyoya, 26, running from the officer following a traffic stop.

The officer, who has not been named, is then heard telling Mr Lyoya to “let go” of his Taser, before the man is shot as he lies face-down on the ground.

The shooting has led to protests.

Dozens of demonstrators gathered on Wednesday outside the Grand Rapids Police Department (GRPD) demanding the name of the police officer involved be made public.

Mr Lyoya is originally from the Democratic Republic of Congo and had lived in Grand Rapids for about five years, according to the office of civil rights attorney Benjamin Crump, who is representing the Lyoya family.

On Wednesday, the GRPD released footage of the incident from a police body camera, a police unit’s dashcam, a mobile phone and a home surveillance system.

One of the videos shows the officer pulling over Mr Lyoya’s vehicle shortly after 08:00 local time (12:00 GMT) on 4 April.

The officer decided to stop the car for improper registration, authorities were quoted as saying by CNN.

Mr Lyoya gets out of the car, but the officer asks him to get back in.

Appearing confused, Mr Lyoya stays out of the vehicle and asks what he has done. The officer asks if he speaks English, and Mr Lyoya replies “yes”.

Mr Lyoya is then asked repeatedly if he has a licence, and after a brief conversation he runs from the officer.

The two are then seen wrestling on the ground and the policeman gets out his Taser, which the two fight over. The officer tells Mr Lyoya to let go of the stun gun.

During this altercation the officer accidentally turns off his body camera, according to police.

However, footage filmed from the mobile phone of Mr Lyoya’s passenger has also been released, which appears to show the officer shooting Mr Lyoya in the back of the head.

Speaking at a Wednesday briefing, GRPD chief Eric Winstrom said: “From my view of the video, Taser was deployed twice. Taser did not make contact.”

“And Mr Lyoya was shot in the head. However, that’s the only information that I have,” he said, describing the incident as a “tragedy”.

The police officer is currently on administrative leave pending the outcome of the investigation. He would not be identified publicly unless criminal charges were to be brought, Mr Winstrom said.

Mr Crump, representing the Lyoya family, has demanded that the officer be fired and charged.

He tweeted that the videos showed the police officer shooting unarmed Mr Lyoya “while he was on the ground and facing away from the officer!”