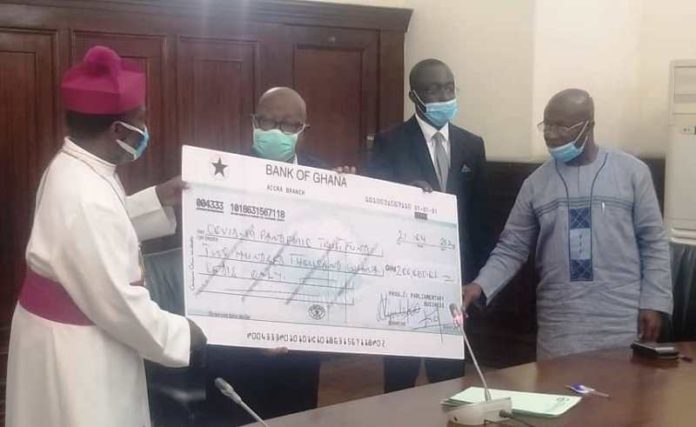 Parliament has donated GH¢200,000.00 to the Covid-19 National Trust Fund to financially support the government’s fight against the disease.

During the presentation ceremony, the Majority Leader, Osei Kyei Mensah-Bonsu, noted that Parliament, as an arm of government, has worked effortlessly to ensure the establishment of the Fund.

Thus, it is appropriate for the legislative arm of government to also contribute to the Fund, which will support the health system and alleviate people who have been badly hit by the pandemic.

“Before the bill came to Parliament many Ghanaians had expressed the desire to assist fellow Ghanaians in this period of want.

“And as the institution that passed the bill, we deemed it appropriate to make our own contribution towards the fight against the pandemic,” he said.

He further clarified that the contribution is different from a GH¢100, 000.00 donated earlier by Members of Parliament on the side of the Majority.

On the part of the Board of Trustees, a Board Member, Archbishop Justice Offei, commended Parliamentarians for taking such a bold step.

“This is an encouragement to the whole nation, because if the Legislature, which brought this Fund into being, has supported it, it means it is something worthy to be supported.

“And so for us, it is as if giving birth and giving something to the child you have delivered to go on with life,” he said.

There’s no ex-gratia in the Constitution – Inusah Fuseini