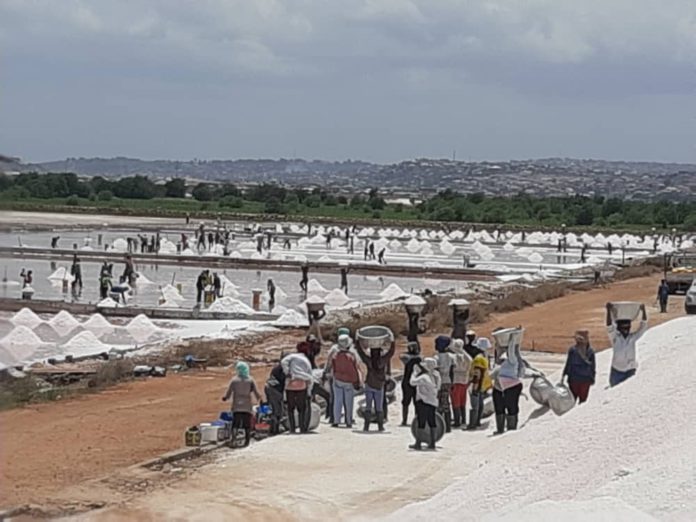 It’s entire board, management and workers are Ghanaian. The positive impact of the Company is appreciated not only by its thousands of employees but also by hundreds of salt sellers throughout the country as a whole.

It is worthy to mention that during this whole period of the lockdown and Covid-19 pandemic, Panbros has not laid off a single worker. The company has been able to organize its operations such that all workers are able to go about their duties in safety and without any disruption and also continue to enjoy full salaries amidst the pandemic.

According to the company, a developer has forcibly taken part of its legally acquired concession in an effort to construct a cement factory. Authorities are aware that the siting of a cement factory near a saltwork is the most undesirable thing to do as the cement dust will not only affect salt crystallization but also contaminate the salt being produced making it inedible.

The Managing Director of the company, Mr. Michael Odartey-Wellington, who spoke to the Press on the issue, informed that sometime in 2013, the Ngleshie Alata Stool who are the allodial title holders of the Panbros concession made a request for the release of 5 acres of the 498 acres they had leased to Panbros Salt Industry, a request to which the company obliged. The Stool subsequently sold the released land to one Archibald Ato Paitoo.

“It appears that Archibald Paitoo has currently forcibly taken an additional 17 acres which is the only area available for a planned expansion of Saltworks by Panbros to develop a cement factory.

“As a law abiding company we have restrained our workers from having a confrontation with the developer who has deployed landguards, as we do not want to have any bloodshed. We have therefore petitioned relevant authorities to intervene and stop the developer. Our worry is that till now the developer is still constructing without permit”.

The Panbros area is an environmentally protected Ramsar site.  The location of a cement factory in this area will harm the ecology of this sensitive area and destroy the ability of the company to produce large quantities of edible salt.

The company continued, “From our checks with the Ministry of Trade and Industry and the Secretariat of the 1D1F and the GIPC it does not appear that these institutions have any knowledge of the project so then we ask: WHO IS BEHIND THIS?”

When contacted, The Executive Secretary of the Chamber of Cement Manufacturers, Rev. Dr. George Dawson-Ahmoah denied knowledge of such a new cement company emerging but was quick to comment that looking at the case of Panbros Salt Industries, ‘if truly such a development is ongoing then it should be condemned outright.’

Rev. Dr. Dawson-Ahmoah who doubles as the Chairman of the Tema branch of the Association of Ghana Industries (AGI) commended Panbros Industries Ltd. for actively supporting the local industries in the production of liquid soap in this Covid-19 period as the salt serves as raw materials. “We should not sit back and destroy activities of a pioneer local company that feeds the economy. I therefore beseech the relevant authorities to expedite action on stopping the construction of this cement factory!”