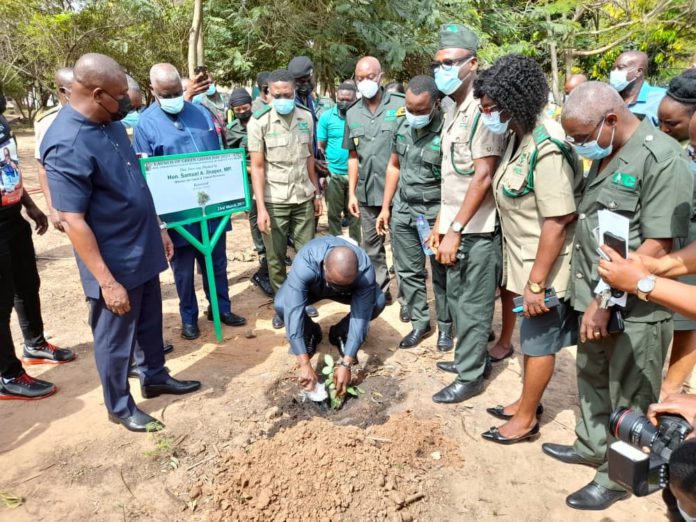 The Ministry of Lands and Natural Resources says the trees planted as part of the Green Ghana Project in June this year have survived.

At a press briefing held in Accra on Thursday, the Ministry indicated that the maiden project was successful as over seven million trees were planted across the country.

Deputy Lands Minister, Benito Owusu-Bio, said some third parties, including the National Investigations Bureau, assisted in assessing the outcome of the project.

“We were very pleased and happy when we were informed by the National Investigations Bureau that they have done an independent assessment of the Green Ghana Project across the nation in every district. They’ve actually presented their report to us and I can say that the report was favourable.

“The report states that 85% of what we planted survived and that we should pat ourselves very well for that because in the field of afforestation, 85% survival rate is a very good percentage and a very good mark,” he touted.

The Green Ghana Project is an initiative by the government which is being implemented through the Lands and Natural Resources Ministry and the Forestry Commission with the pivotal aim of preserving the country’s depleting forest reserves and the environment.

According to the Food and Agriculture Organization of the United Nations, Ghana is one of the tropical countries with the highest percentage of rainforest loss in the world.

In the quest to increase the nation’s forest cover, Mr Owusu-Bio announced that the Project will continue in 2022, with a grand target of planting some 20 million trees nationwide.

The Atwima Nwabiagya North legislator stated that the Ministry was overwhelmed with the support Ghanaians provided during the maiden edition of the project, and expects the same response next year.

“Our target then was five million and this was to help in restoring our degraded forest cover. We began by putting together our inauguration and planning committee and then we also had a fundraising committee. We distributed a lot of seedlings too and we had designated seedling collection points,” he said.

“Overall, 7 million seedlings were distributed and we have the list of the regional distribution that was done and we can attest to the fact that almost everything was planted. In fact, there was very high demand to the extent that at a point in time we even ran out of the seedlings,” he added.

“In 2022, Green Ghana continues [and] it’s still going to be held on June 11 again but then we are praying that God will favour us with enough rains like we received this year so that next year’s event which we have planned to plant 20 million will become a very successful event,” he said.