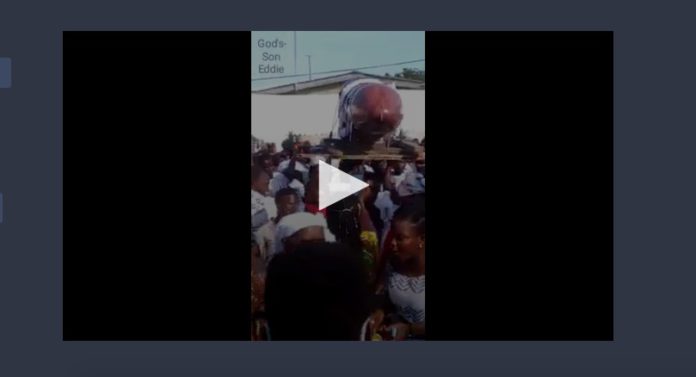 A group of mourners somewhere in Accra have taken their treatment given to the dead to bizzare levels.

A video of the mourners carrying their deceased relative in a penis-shaped casket has shaken social media to its core.

The funeral grounds of the yet-to-be-identified decease was filled with, not only well-wishers but bystanders who wanted to catch a full glimpse of the special and giant’penis coffin’.

Mourners, both young and old filled past the casket which has been laid as they looked on in either amazement or fear.

It is not particularly clear why the deceased was being accorded the particular treatment of being buried in a ‘dick-shaped coffin but it is a common practice in parts of Ghana to bury people in caskets that shows their lifetime professions.

Per the language in the background, the funeral is believed to have happened somewhere in the heart of Accra.

The Greater Accra region is known for resting mortal remains in such caskets with many bodies getting buried in fish-shaped coffins, for instance, if they worked as fishermen.

The video has gotten many people wondering what their caskets would look like should they transit to eternity.