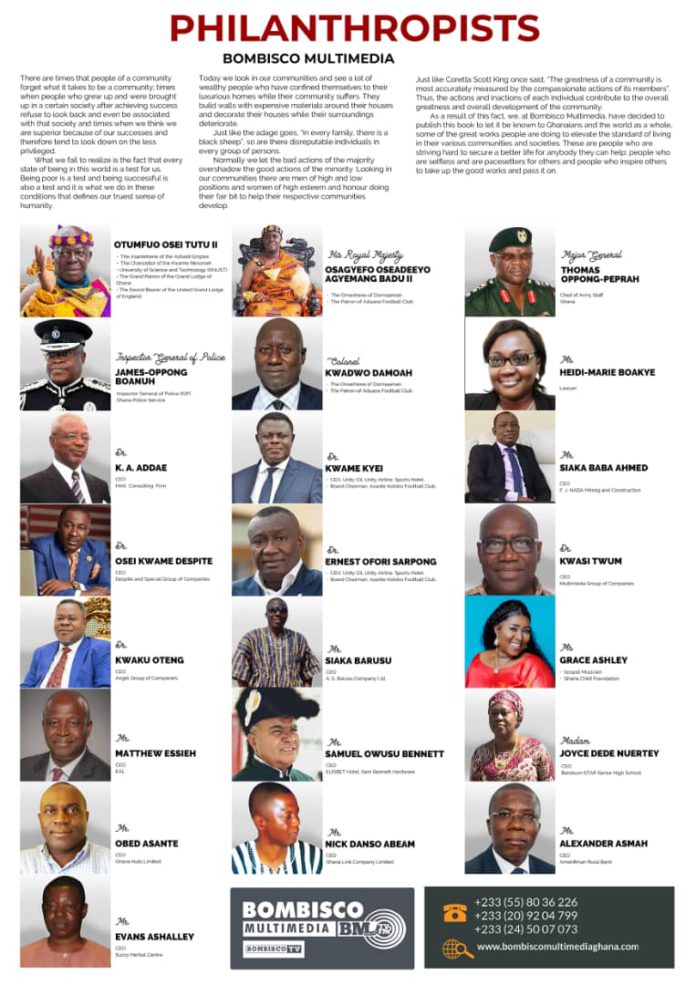 Bombisco Multimedia has honoured the Asantehene Otumfuo Osei Tutu II and the Chief Executive Officer (CEO) of the Multimedia Group, Kwasi Twum, for their immense contributions towards the well being of the society.

According to the group, the contributions of these individuals in shaping and forming societies informed the honours.

“There are times that well-to-do people in the community forget about the poor and vulnerable after achieving success.

“We look in our communities and see a lot of wealthy people who have confined themselves to their luxurious homes while their communities suffers.

“They build walls with expensive materials around their houses and decorate their houses while their surroundings deteriorate but Otumfuo, Kwasi Twum and the others selected have continuously given back to the poor in society,” they eulogised.

In this regard, Bombisco Multimedia stressed it has authored a book titled PHILANTHROPISTS that throws light on the philanthropic works of these individuals which will be out soon.

“Bombisco Multimedia, have decided to publish this book to let it be known to Ghanaians and the world as a whole, some of the great works people are doing to elevate the standard of living in their various communities”, the statement added.

It further made reference to Coretta Scott King’s saying that “The greatness of a community is most accurately measured by the compassionate actions of its members.

“Thus, the actions and inactions of each individual contribute to the overall greatness and overall development of the community”, as it extolled the individuals.

Though one would have expected a big function to honour Otumfuo, Kwasi Twum and the other philanthropists, the group will present copies of the book and accompanying plaques to the deserving individuals due to the coronavirus pandemic.

Copies of the books will also be given to institutions to tell the world of the good things these noble personalities have to offer the society.