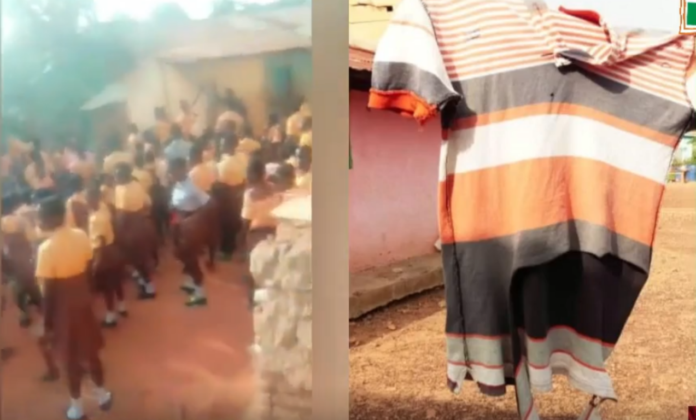 Pupils of Osenso D/A Primary and Junior High School (JHS) in the Western region have vented their frustration on the chief and his elders over the absence of desks.

According to reports, the angry students ransacked the chief’s palace and took the stools back to school to aid in teaching and learning.

Even more serious is the decision by the students to assaults the linguist whom they accused of squandering monies meant for their desks.

He explained that the District Chief Executive of the area had given the Osenso Assemblyman, Ernest Ohene Asante GH¢3000 for new desks but he failed to deliver.

The Osenso chief alleged that the headmaster and teachers of the school who thought he and his elders knew about the money unleashed the pupils to town to demand their desks from them.

When the pupils stormed the palace and did not find the chief, he said, they matched straight to the house of the linguist and manhandled him.

Nana Yaw Gyasi II said the children have committed sacrilege for taking the stools from the palace and as a result, would require special rituals to restore the stoll’s integrity.

Sharing his ordeal, the linguist said he was having his breakfast when the pupils, chanting war songs, besieged his house in anger.

He said they accused him of taking GH¢200 out of the GH¢3000 meant for their desks for his personal gains.

“They tore my favourite shirt my wife bought me and beat me up. It was a sad day of my life,” he narrated.

Headmaster of Osenso D/A school, William Duodo, reacting to the issue said he could not absolve himself from blame.

He indicated that if he hadn’t sacked the pupils to go home for the desks, they would not have perpetrated such an act at the palace.

The headmaster, however, expressed worry over the lack of desks, teaching and learning materials for a student population of over 240.

“The students lie on bare floor to learn; we have written to the Education Directorate to no avail,” he explained.

This notwithstanding, Mr. Duodo rendered an unqualified apology to the chief and elders for the actions of the children.