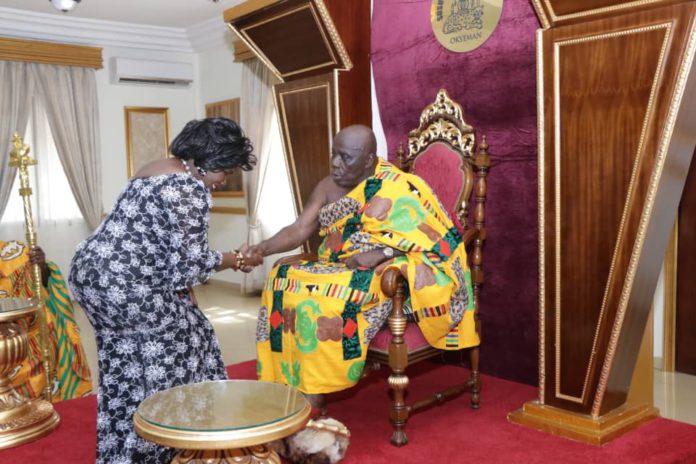 The Okyenhene of the Kyebi State, Osagyefo  Amoatia  Oforipanyin, has commended the Minister for Sanitation and Water Resources, Cecilia Abena Dapaah  for her hard work towards  improving the sanitation situation in the Country.

He said the country cannot develop in filth, therefore, there was the need for all Ghanaians to support the efforts of the government in the national sanitation campaign.

He stated: “It is our collective responsibility to achieve progress”.

The Okyenhene Osagyefo  Amoatia Oforipanyin made the point when Mrs Dapaah with her Deputy Minister, Michael Gyato and a team of officials  from the Ministry paid a courtesy call on the Okyenhene  at his Palace at Kyebi  in the Eastern  Region on Sunday  December  8 ,2019 .

The sector Minister and her entourage were on their way to Kumasi to begin a three-day official working visit in Kumasi.

The Okyenhene noted that the Country’s tourism industry cannot thrive if the country was not clean.

He called for strong sanctions to be meted out to people who litter and violate the sanitation bye laws.

Osagyefo  Amoatia  Oforipanyin  reiterated  the need to consolidate  the  development  agenda of the Country.

He said  as part of  activities  earmarked  to celebrate  the  20th  Anniversary  of his enstoolement  as the Okyenhene,  the Traditional  Authorities  have  declared  to plant 25 million  trees in the next five years  and also  play a key role in  green g the Country.

He commended the Government for the ‘Ghana Beyond Aid’ Program initiated to promote the development of the Country.

The sector Minister, Hon Dapaah commended  the Okyenhene  for his  leadership  which  has brought a lot of developments.

She said following the request made by the Okyenhene, Ghana Water Company will, in the near future open an office in the town.

The Sector Minister also praised the Okyenhene for his interest in protecting the country’s water resources and the environment.

She congratulated the Okyenhene for the 20 years of his leadership and wished him good health and long life.

On behalf of the ministry, the sector minister presented various items to the traditional council.

These include 100 pieces of litter bins, 100 boxes of bottled water, drinks and other assorted items.

The peak of the 20th Anniversary  Celebration comes off  in a week’s time with a grand durbar.