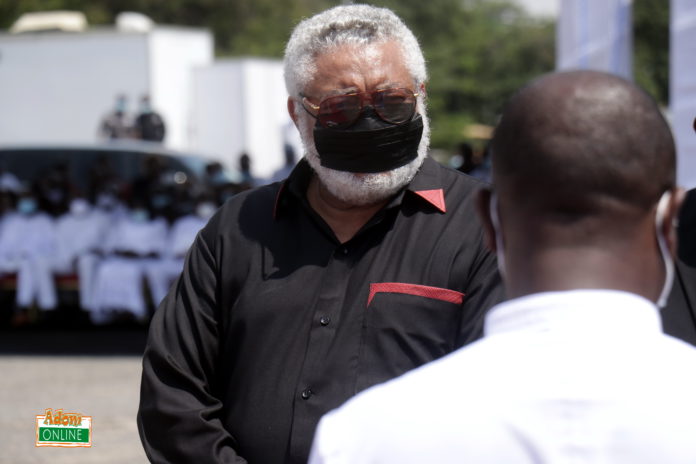 The Office of Former President Jerry John Rawlings says there will be no one-week ceremony held in his honour.

This was announced in a press release signed by the Communications Directorate and sighted by JoyNews.

According to the statement dated November 14, “all flyers and other communication announcing such a ceremony are false and should be ignored.”

The statement which was signed by Kobina Andoh Amoakwa also said individuals who wish to call on the family of the late former President to express their condolences will be received by pre-arranged appointments.

“Due to Covid-19 protocols, the office kindly informs all groups and institutions who obtain appointments that visitors with appointments who arrive at the former President’s office without nose masks will not be allowed in,” he added.

The statement also urged the general public and sympathisers to visit the Ghana International Conference Centre to sign the book of condolence opened in honour of the late President who passed away on Thursday, November 12 after a short illness.

Meanwhile the opposition National Democratic Congress (NDC) has announced that it will be holding a vigil in honour of late former President.

The vigil is expected to come off Sunday, November 15, at the Obra Spot in Accra from 5 pm to 12:00 midnight.

“Accordingly, it has been decided that the NDC’s funeral activities for the founder will begin immediately and continue through to his burial,” a statement signed by the General Secretary of the party, Johnson Asiedu Nketia said.