On Twitter the rapper claims he’s being “used to spread messages I don’t believe in.”

He has been a vocal supporter of President Trump but this decision appears to centre around a campaign he was linked to known as Blexit.

She claimed the musician had designed clothing for the campaign, something which the rapper has now denied.

“I introduced Candace to the person who made the logo and they didn’t want their name on it so she used mine. I never wanted any association with Blexit. I have nothing to do with it.” he tweeted.

The rapper tweeted: “My eyes are now wide open. I am distancing myself from politics and completely focusing on being creative.”

It seems Kanye West intends to step away from politics altogether now.

Writing to his 28.7 million followers the musician said: “I support creating jobs and opportunities for people who need them the most.

“I support prison reform, I support common-sense gun laws that will make our world safer.

“I support those who risk their lives to serve and protect us and I support holding people who misuse their power accountable.”

It’s not the first time, the rapper, who wants to be referred to as Ye, has had to clear up his political beliefs.

Earlier this year he came under fire for for saying that the 13th amendment of the US Constitution, which brought an end to slavery, should be abolished – a statement that he later clarified. Apparently he meant to write “amend”. 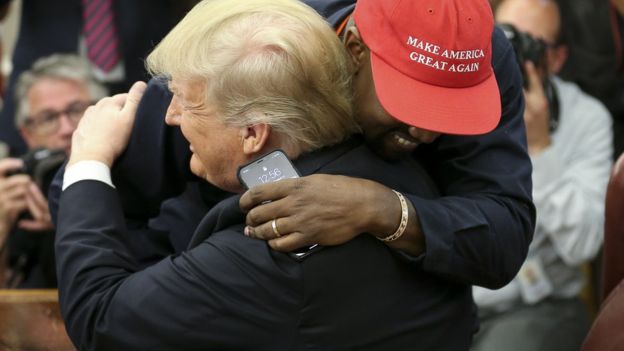 And his performance on the American comedy show Saturday Night Live a few weeks ago sparked outrage and amusement in equal measure.

The 49-year-old, who is married to Kim Kardashian, wore a hat with Donald Trump’s slogan “Make America Great Again” and apparently gave an unscripted, off-air rant in support of the president.

Excerpts filmed by the audience and shared on social media show the rapper discussing his support for President Trump, his pledge to run for president in 2020 and the need for a “dialogue not a diatribe”.

“So many times I talk to a white person and [they] say, ‘How could you like Trump, he’s racist?’” he said.

“Well, if I was concerned about racism I would’ve moved out of America a long time ago.”

Kanye West has been very upfront about his support for President Trump.

However stars including Snoop Dogg, T.I. and John Legend have criticised Kanye West for meeting the US leader.

Kanye West ended this latest series of messages saying: “I believe in love and compassion for people seeking asylum and parents who are fighting to protect their children from violence and war.”

“I would like to thank my family, loved ones, and community for supporting my ACTUAL beliefs and my vision for a better world.”