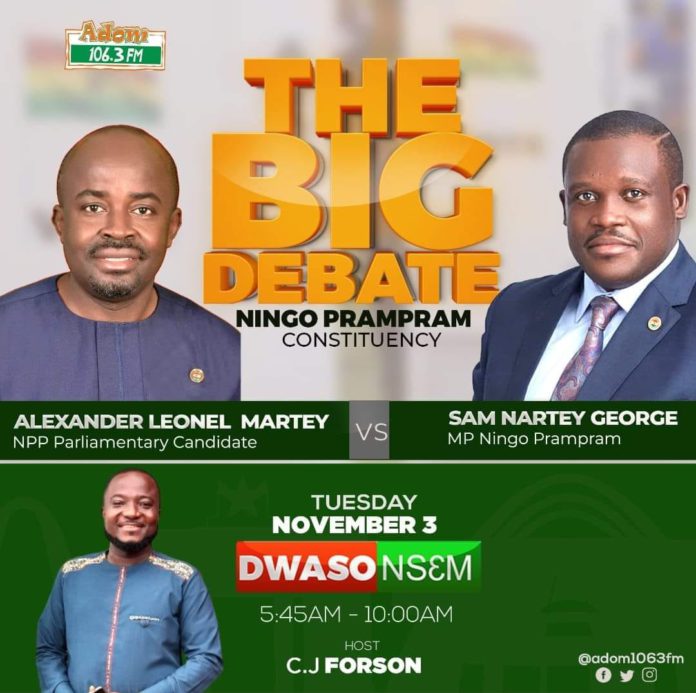 “I will establish a minimum gap of 20,000 in the upcoming December 7 election for them [NPP] to know this is our territory,” says Ningo Prampram Member of Parliament, Sam George.

This was when the New Patriotic Party’s (NPP) Parliamentary Candidate (PC), Alexander Leonel Martey, went missing in action for a debate.

The Adom FM’s Dwaso Nsem team stormed the constituency in the build-up to the December 7 election with ‘The Big Debate’.

This was to grant the two contenders an opportunity to tout why they are the best choice for the constituency.

However, for reasons best known to Mr Martey, he refused to show up for the debate as planned leading to a solo contest.

Finding the situation as a golden opportunity, Mr George touted his achievements and why he is still the best choice for the constituents.

Even when the District Chief Executive for the area, Paa Nii Doku was asked to mount the podium for a balance, Mr George threatened to boycott the debate if the former is not sacked.

He eventually walked off the interview, forcing the producers to talk to Mr Doku to descend the podium which he humbly obliged since he had already had his time on the show.