The Nigerian police force has released closed-circuit television (CCTV) footage of robbers who attacked a bank in the town of Offa in central Kwara State in early April.

The police in a tweet on Saturday (May 5) declared wanted four of the gangsters who participated in the bloody bank robbery.

The police described them as “gang leaders and principal suspects” of the incident.

Photos of the gang leaders in action were accompanied by text: “DECLARED WANTED BY THE NIGERIA POLICE FORCE FOR BEING RESPONSIBLE FOR THE OFFA BANKS ROBBERY.” 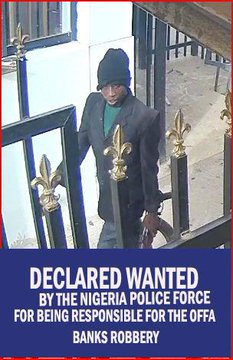 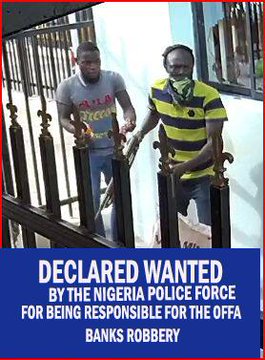 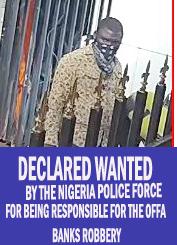 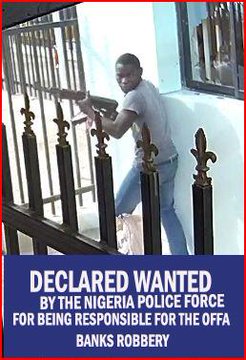 FOUR (4) GANG LEADERS AND PRINCIPAL SUSPECTS WHOSE PICTURES ARE ATTACHED ARE HEREBY DECLARED WANTED BY THE NIGERIA POLICE FORCE FOR BEING RESPONSIBLE FOR THE OFFA BANKS ROBBERY.

A local portal, the Cable Nigeria said, “the images provided were the clearest since the incident took place exactly a month ago.” The Kwara state government has also promised 5 million Naira bounty for information about the suspects. Police also gave hotlines to be contacted in case of information.

In mid-April, police reported the arrest of nine people over the robbery. Some 15 people were killed when the armed gang attacked two banks and a police station in central Nigeria.

The gang struck in broad daylight in a busy commercial district in Offa, Kwara state, on April 6, opening fire indiscriminately as they made off with the looted cash.

Federal police spokesman Jimoh Moshood at the time said, the arrests were made during “massive raids” in Offa and the southwest, which saw a shoot-out between officers and suspects.