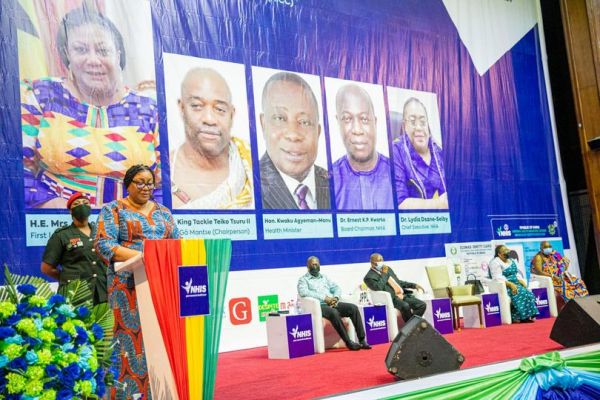 The National Health Insurance Authority (NHIS) says its research shows they can fund childhood cancers and other expensive treatments including family planning and sickle cell disease.

There has been pressure from prominent Ghanaians including first lady Rebecca Akufo-Addo to add child cancer to the services provided and treatment available under the scheme.

According to an actuarial study done by the authority, this will however limit the Authority’s ability to roll on more new services.

Deputy Director, Actuarial, at the NHIS, Magnus Owusu-Agyemang, who presented the findings of the study conducted said childhood cancers and a few expensive treatments can be rolled on to the scheme, it will limit its ability to introduce services.

“These treatments, that is child ooh cancer, family planning and the sickle cell will make the Authority have less capacity to fund further inclusions”, he said.

Board Chairman of the Authority Dr. Ernest Kwarko who presided over the data day, as part of the NHIS week said they will go after institutions who charge patients despite having health insurance.

“The illegal payments that are made by our members that visit credential facilities and even though they access insured services and insured packages and yet providers demand payments from them will have to stop. I have formed a special purpose vehicle just to deal with this.”

The National Health Insurance Authority under its new leaders has made significant improvements to the scheme. It hopes to be able to digitize entirely, the filing of claims by partner health institutions to cut losses and corruption.

Speaking at the same event, Chief Executive Officer of the authority Dr. Lydia Dsane-Selby noted that the scheme was in good standing and have been making surpluses for four years in a row.

“We have been in surplus for four years, and it keeps rising, we are in good standing. But additions and changes in our benefits package have an implication and we must do it step by step and in an evidence-based way.”

For her, the goal of Universal Health Coverage is still achievable with the National Health Insurance Scheme as a pillar.