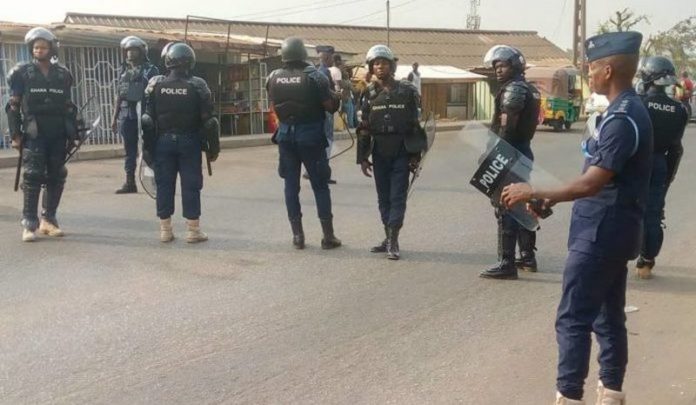 The new Central Regional Police Commander, Deputy Commissioner of Police (DCOP) Alexander Kwami Amenyo, has resolved to clamp down on criminal activities in the region to maintain its peaceful atmosphere.

He has assured that his administration would be tough on miscreants, criminals and undesirable characters to safeguard the security of the region, particularly in the face of potential extremist attacks in the country.

Citing the recent disarray in Bawku, he said it was dangerous to compromise on security given
the country’s porous borders, which was providing easy access to infiltrators.

“…We all know about the Bawku crisis. These are things that Jihadists will take advantage of and so if we are down south here and we find people committing crime and we continue to compromise and fail to deal with them drastically, it will not augur well for our country,” he said.

DCOP Amenyo, who succeeds DCOP Kwadwo Antwi Tabi, said this at his maiden official meeting with the media as part of stakeholder engagements to outline his vision for the region.

As part of the strategy, he said the police would enhance its community patrols to increase visibility and reinstate defunct checkpoints to ward off criminals.

The Regional Commander said the police would work closely with citizens and the media to maintain peace and order, adding: “We will rely on informants because we can’t do it alone.”

To that end, DCOP Mr Amenyo urged communities to form watchdog committees, assuring them of adequate professional training for such bodies.

He said consistent and comprehensive education would be provided to the public through the electronic media and community engagements on how to prevent crime in the spirit of shared responsibility.

He bemoaned the high rate of road crashes in the region and the country as a whole, attributing it basically to human error while declaring war on the canker.

On police professionalism, DCOP Amenyo said his outfit was working hard to cleanse the dented image of the police as part of efforts to give the Service a world-class status.

He said the Police Administration was very determined in its re-orientation programmes and offering refresher courses for personnel to update their skills to enable them to act professionally within globally accepted standards.

“We have resolved to ensure that our men on the ground will be very professional and will be apt in performance without infringing on the rights of innocent persons.”

DCOP Amenyo appealed to journalists to be objective in their reportage to avert setting the public on a collision with the police.

He called for a strong collaboration between the media and the police administration adding;

“What is important is for all responsible media houses to adhere to the ethical standards of the profession and present the news to the public in a decent way.”

“Sometimes people exaggerate things for the police to look very bad. So, we will plead with you to always crosscheck your information,” he added.