In a blistering attack on a former Auditor-General, the opposition National Democratic Congress(NDC) has expressed shock at President Akufo-Addo for appointing into his government, a man they say has no credibility.

“To appoint a character like Dua-Agyeman to be the chairperson of the Audit Service Board is very surprising”, he told Joy News Parker-Wilson in an interview Tuesday.

READ ALSO: Ghana has a long way to go due to bad leadership – Rickett Hagan

The reputation of Edward Dua-Agyeman as a hatchet man precedes him, and the slightest investigation into his background would have revealed the following facts about him:

• It was Mr Edward Dua-Agyeman who, in 1983, was banned by the Institute of Chartered Accountants, Ghana, from practising accountancy and auditing in Ghana for forging an audit report for a private firm whose accounts he had neither seen nor audited.

• It was the same Edward Dua-Agyeman who, in 1986, led a team to conduct special investigations and at the end of the exercise presented a false report causing some Heads of Department to suffer unjustly even though they were innocent, leading to Dua-Agyeman being sacked.

• It was the same Edward Dua-Agyeman who, on assuming office in 2001 as Auditor-General, sent BNI officials to arrest his predecessor Mr Osei Tutu Prempeh in church, on false allegations of possessing confidential state documents.

• It was the same Dua-Agyeman who hauled Mr Prempeh to the police station on another false allegation that Mr Prempeh had unlawfully appropriated a Government vehicle on his retirement, only for it to turn out that the vehicle had actually been duly valued and sold to Mr Prempeh by the state.

• It was the same Dua-Agyeman who falsely labelled a ‘Final Report’ of an audit into Castle renovations during President Kufour’s term that implicated some of his Ministers and officials as an ‘Interim Report’. He then formed a bogus Committee which doctored the report to exonerate some of the Ministers and officials and fraudulently described the doctored report as the ‘Final Report’.

• It was the same Dua-Agyeman who awarded himself End of Service Benefits and illegally took two luxurious state vehicles home and hid them in his Teshie Nungua residence while on his terminal leave, even though the vehicles had neither been valued nor purchased by him.

It was the same Dua-Agyeman who, in 2005, leaked what was supposed to be an audit report on the publishers of Kwesi Pratt Jnr’s ‘Insight’ newspaper, deliberately quoting concocted tax liability figures.

The NDC has honed its attack on Edward Dua-Agyeman after it emerged he is secretary to a Cabinet Committee Responsible for the Coordination of Forensic Audits which initiated audits into state agencies under the NDC government.

The report, leaked to the media, found that more than ¢800m was misappropriated by these state agencies. The NDC said Dua-Agyeman cannot be appointed secretary to the cabinet sub-committee because he is not a member of cabinet or secretary to cabinet.

The NDC also rejected the audit done by Dua-Agyeman’s Cabinet Sub-Committee and doubted the committee actually exists. The NDC General Secretary said the audit which was done by a private firm is illegal because it was not done with the authorisation of the Auditor-General Daniel Domelevo as prescribed by the 1992 constitution.

The NDC’s take on Dua-Agyeman comes several days after Mr Domelevo accused his Board Chair of interfering in his work. The Auditor-General has petitioned the President on the matter.

Dua-Agyeman responded, said the Auditor-General does not want to work under Board supervision. But he is yet to respond to fresh allegations levelled by the NDC. Dua-Agyeman has rather indicated intentions to sue the NDC over the allegations.

Dua-Agyeman has taken on the NDC before while the party was in government from 2009 to 2012. This was after the Mills administration denied him his retirement benefits, claiming he was a political appointee and not a career civil servant.

He won in 2013 after a Fast Track High Court directed the State to pay monthly pension and all the money owed the former Auditor-General.

Dua-Agyeman is back in government under the Akufo-Addo administration and a former Deputy Chief of Staff he fought in a series of letters over his entitlement, Dr. Valerie Sawyerr, has been named in the audit report conducted by the cabinet sub-committee of which Dua-Agyemang is secretary. 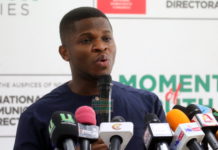