The dominance of Mr Alban Sumana Kingsford Bagbin,Second Deputy Speaker of Parliament in the Tema East Constituency branch of the National Democratic Congress (NDC)was on display once more, when some executives of the party there scrambled for his campaign T-shirts.

Scores of the executives fell over one another at Tema New Town just to grab the T-shirts of the respected veteran legislator who is aspiring for the 2020 Presidential ticket of the opposition party.

“This is not surprising at all, do not be surprised either; Tema East is an Alban Bagbin stronghold…the support he has here is genuine, it is not paid for like in the case of some other aspirants,” Bernard Ayi Quaye, a Branch Youth Organiser of the party explained.

According to him, the scramble for Bagbin’s T shirt was just a matter of passionate supporters and crusaders of the Nadowli-Kaleo MP fighting for a means to wear their support openly.

During the scramble, some some picked more than a single shirt claiming they were going to give them to other executives who were not around at the time of the distribution of the campaign shirts.

The behaviour of the Tema East executives comes as an affirmation of an earlier declaration by some Constituency executives there that Tema East was wholly for Mr Bagbin.

In expression of their allegiance to the Second Deputy Speaker of Parliament, some of them have gone ahead to request that that constituency be renamed after him.

Bernard Ayi Quaye explained that, “the reason we in Tema East are solidly behind Mr Bagbin is simple; his honesty…his willingness to address the real issues in the party.”

He said Bagbin’s promise to chart a new administration course in which the party’s executives would be rewarded, rather than abandoned the way President Mahama abandoned them during his presidency, was what the party needed.

Most of the other executives scrambling for T shirts turned down invitation to speak to the media, but Mr. Cosmos Okumo, another executive member who spoke said “We want to tell everybody that as for us here in Tema East, we are for Bagbin and we will show it for the whole world to see.

Over 8,000 delegates to attend NDC Congress on December 17 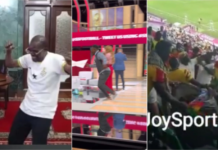