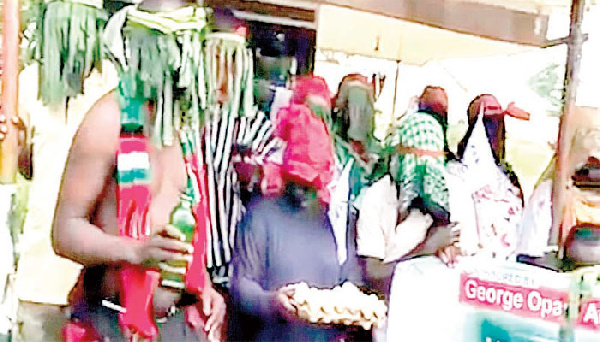 There is a wild hunt to identify and possibly punish some National Democratic Congress (NDC) members who openly invoked curses with ‘Antoa Nyamaa’, the dreaded deity in the Ashanti Region, during the Limited Voters’ registration exercise in the region.

The NDC members, who covered their faces with green leaves and clothes like Boko Haram terrorists, invoked the curses on Wednesday.

They openly asked the dreaded river deity to immediately deal ruthlessly with anybody who would make an attempt to register minors in the electoral exercise.

Using eggs and schnapps, the NDC members, who are yet to be identified, directed their curses at parents and Electoral Commission officials in Kumasi, the Ashanti Regional capital.

According to him, the Manhyia Palace – the official seat of the Asantehene, Otumfuo Osei Tutu II – has placed a firm ban on invocation of curses with river gods in Kumasi and Asanteman in general and could not fathom why the NDC guys would disrespect the directive.

The Nsumankwahene said the NDC members that invoked the curses had openly flouted an order of the Manhyia Palace, for which reason they would be punished in a traditional way if they were found.

“It is wrong for anybody to curse with river deities in Asanteman and so these people acted in a negative way. You should not glorify their actions. Rather, you should condemn them.

“Anyone who knows their identity should report them to the Asantehemaa’s palace and we shall initiate processes to sternly punish them in a traditional way,” he stated on Kumasi-based Kessben FM.

The Nsumankwahene also reminded residents of Kumasi and Asanteman that the ban on curses with river deities had not been lifted; he admonished residents to take notice.