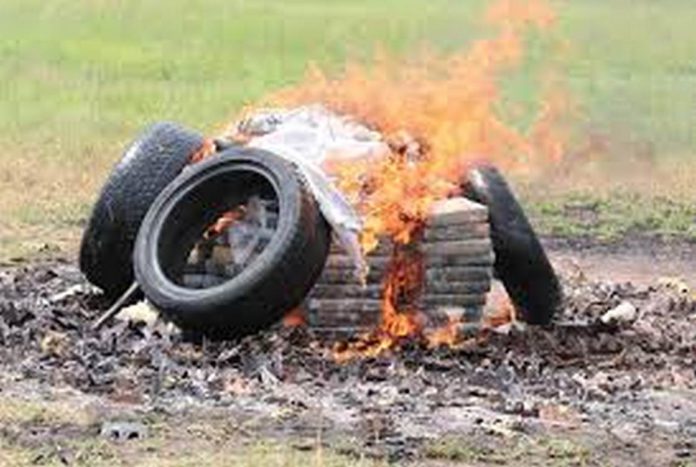 The Narcotics Control Commission has destroyed $3 million worth of cocaine which was seized in a joint operation at the Terminal Three facility at the Tema Port on September 2, 2020.

It followed a destruction order the Accra High Court granted the commission last Wednesday to undertake the exercise, while the investigation into the seizure continues.

The destruction of the 150 kilogrammes of the illicit substance, which were wrapped in slabs and concealed in a sugar consignment from Brazil, were meant for Tradepass Ghana Limited, which officials declared as the importer, who claimed the consignment was to be re-exported to Europe.

At the destruction ground at the Bundase Military Range in the Greater Accra Region, officials of the commission poured kerosene on the slabs, containing white powdery substances in an open space and set them ablaze.

Representatives from the Environmental Protection Agency (EPA), the Ghana Standards Authority (GSA), National Security, the Attorney-General’s Department, as well as a Registrar from an Accra High Court witnessed the destruction.

Briefing journalists at Bundase, the Head of Communication and Media Relations at the commission, Mr Francis Opoku-Amoah, indicated that it had become necessary to undertake the destruction in line with the commissions’ regulation, which prescribed early destruction of illegal substances as and when they were seized.

He said the bulky consignment coupled with the lack of stock space also prompted officials to seek the court order to undertake the exercise, while some quantity of the drug had been preserved in the court to aid future possible prosecution.

The docket on the case, Mr Opoku-Amoah indicated, had since been forwarded to the Attorney-General’s Department for advice on how to proceed with the case.

While Mr Opoku-Amoah will not disclose further details on the number of people that had been arrested in connection with the seizure, he stressed that those who were initially arrested had been granted police enquiry bail.

“I can only say that a number of people were arrested and have been granted bail and as and when we need them, we invite them to our offices,” he said.

The country, Mr Opoku-Amoah stated, was occasionally used as a transit point for cocaine haul, hence the continued enhancement of skills and capacity of staff of the commission to ensure that it did not become a favoured transit hub of drug peddlers.

Asked whether there could be no alternative use for the drugs in the country aside from destroying it, Mr Opoku-Amoah explained that the laws regulating the commission’s activity only made provision for destruction and nothing else.

A package, with a bill of laden number MEDUST209567 which had 27,000 bags of Brazilian white crystal sugar with a gross weight of 1,350 tonnes, was consigned to a local freight forwarding agency, Global Cargo and Commodities Limited, at the time of the seizure.