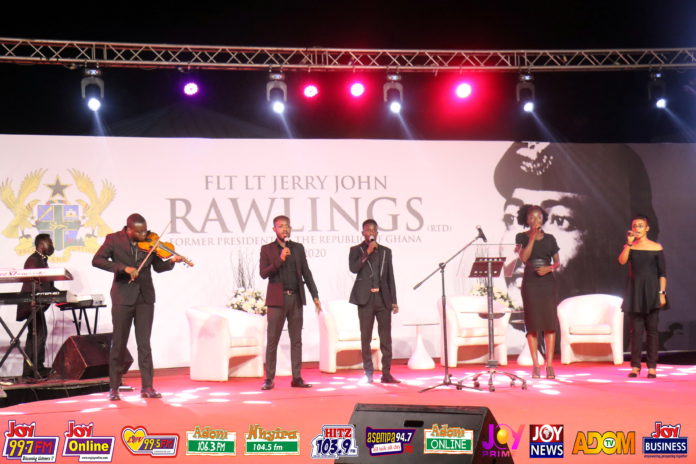 A lot of times both in formal meetings and public fora, Chairman/President Rawlings spoke in parables. Many agitated hearers turn to me for clarification or meaning of what “your boss said”.

I smile them off. Others considered his thoughts garbled and incoherent. Occasionally some thought he was “not normal”. Yet he was clear and sound and had a message to communicate albeit in subtle words.

I knew because he would have mentioned or discussed the objectionable conduct or misconduct to me and others or asked me to note the event and to recall for future action, even eight months later.

That’s part of the so-called enigma of the man who spoke his mind without fear or favour to all manner of persons. Keeping faith with his principles and beliefs. Once you appreciate and keep to his principled work ethics, you can work with J.J. for a century.

I run a paltry 19 years with him one on one. He shared his desk and his thoughts with me in his Spartan office. Never regretted it. Yes, some mistakes, yet he served his people truly and honestly.

Humble enough to admit his fault. He sacrificed his family life for the national good. Hate him or love him. Certain, posterity will judge him more kindly.

One of Ghana’s greatest political icons and father of the long-staying and stable 4th Republic of Ghana. An outstanding African leader; a respectable voice on the world stage. “One of the rarest pearls to be found on the beaches of Africa.”

The late former President of South Africa, Nelson Mandela of South Africa, on the occasion of Mr Rawlings handing over power at the end of his constitutional tenure described him as: “The man who started off as maximum dictator and ended up as the greatest Democrat in Africa.”

Nana Ato Dadzie was the PNDC Central Regional Secretary in 1983. He was later a Special Assistant to PNDC Chairman Jerry John Rawlings. He rose through the ranks to become a Special Presidential Adviser in 1993. He was the Chief of Staff at the Office of President Rawlings until his tenure ended on January 6, 2001.