Some 16 suspects, who allegedly attacked the two police officers at Nanton Kpawumo in Tamale yesterday, have been reminded by the Tamale Circuit Court.

Police officers, Atsu Adanu and L/CPL Mordzi Samuel were allegedly attacked by the community members after they followed a complainant, Rasheed, to Nanton Kpawumo to arrest a suspect, Abdul Rahman, over a stealing allegation.

The victim, Atsu Adanu, who had deep cut on the head and forehead after the attack, is still battling for his life at Tamale Teaching Hospital

The Director-General, Welfare of the Ghana Police Service, COP Maame Yaa Tiwaa Addo-Danquah, visited the victim at the hospital on Friday and assured them that justice would prevail.

The Northern regional crimes officer, Bernard Baba Ananga, speaking to Adom News, said 10 people have been granted bail will 16 suspects who appear before court on remand for further investigations.

According to the crime officer, all the 16 suspects were charged with causing harm and assault on the public officers among others.

Meanwhile, most of the citizens in the community are yet to return to their houses. 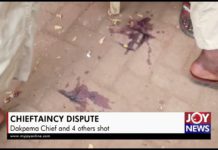