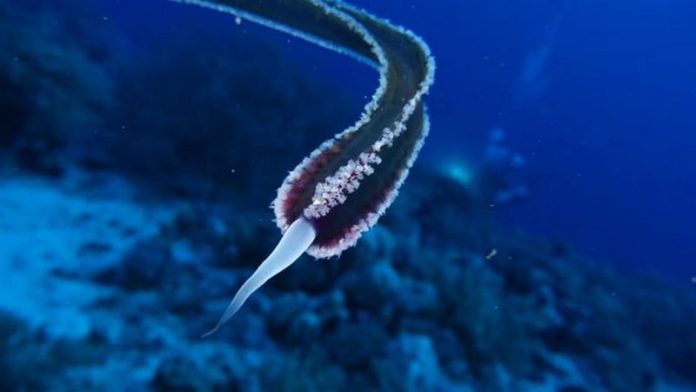 A bizarre tube-shaped creature with no eyes, ears or a mouth stunned divers in the depths of the Red Sea.

Lukas Ostertag was one of the underwater group me who encountered the freaky sea beast while diving in the Sataya Reef, off the Egyptian coast.

The 23-year-old described the creature’s appearance as being a “long square rubber pipe-like thing” with a pointy end.

“It looked like nothing I’ve seen before,” he said. “It definitely was super strange as it seemed to move on its own and nobody knew what it was.”

Lukas said it reminded him of the Yrr – a fictional deep-sea species hellbent on destroying mankind, dreamed up by Frank Sch tzing for his novel, The Swarm.

He and his fellow divers thought it might be a kind of polyp – a soft-bodied organism related to sea anemones and jellyfish.

Others guessed it to be a worm or a kind of plant, Lukas said, while one other person thought it might be a jellyfish.

Looking for answers, Lukas, from Heidelberg, Germany, shared his photos with an online group dedicated to identifying marine animals.

One person wrote: “Wow this thing is a puzzler. I could see it being a siphonophore, soft coral, pyrosome, maybe nemertean, or jellyfish arm. I’m stumped.”

Another commented: “Looks like a nemertean – ribbon worm, but the jellyfish part is possible as well.”

In the end, Lukas got an answer when footage emerged from another group that had been diving the same reef.

“In the end we figured out it was from a jellyfish as another dive group the same day made a video,” he said.

“The thing we saw was the leftover arms of the jellyfish, probably after being devoured by a sea turtle. I guess in the end the arms were still moving a bit because the jellyfish was not eaten long ago.”

The specific species is thought to be the Thysanostoma loriferum.

Lukas said it had been “fun” figuring out what the creature was after being “so clueless” upon the initial sighting.

“That we found out it was a jellyfish was pure luck,” he said.