It’s the dream of many African musicians to jump on collaborations with International artistes as they believe it’s a golden opportunity to sell their music across the globe.

But budding UK-based Ghanaian musician, Dennis Okang, with the stage name K Dee, says it has always been a dream for him to work with fellow Ghanaian rapper Sarkodie.

According to the musician signed onto Afro Mafia Entertainment record label, he sees no African musician being at par when it comes to Sarkodie’s brand and influence in the entertainment sphere.

To prove his point, K Dee added that given the chance to choose a collaboration between Sarkodie and American rapper Rick Ross, he would “snub” the latter, he said in an interview on Aiks TV.

“Most African musicians feel threatened and insecure even when they are expressing their opinion concerning this music industry. I would choose Sarkodie because Africans love their own regardless of the leverage of impact an international artistes will give an act,” he said.

“Our disc jockeys patronise music made in Africa (Afrobeats) presently compared to those abroad,” he added.

Meanwhile, K Dee has a latest song out there dubbed “Love”, produced by GodzBeatz, where he features another great talent Dan Ziggy.

K Dee promises to serve fans around the globe with more tunes to groove with after this hot one. 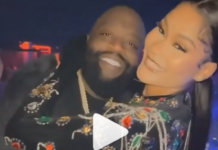