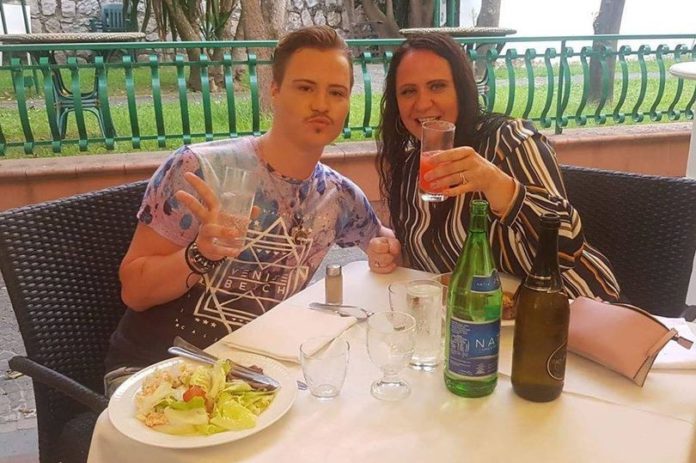 Her precious son, Tommy Thwaites, had taken his own life aged just 25.

Tommy had been suffering frightening flashbacks and night terrors after he was glassed in the face and stabbed in the stomach and back because of his sexuality.

He was set upon by thugs in a nightclub and he suddenly went from being an outgoing, popular entertainer to a recluse who ended his own life in despair.

And after a recent rise in homophobic attacks in the UK, Claire, 48, told the Daily Star Tommy’s tragic story needs to be a warning.

She said: “My son killed himself because he was ashamed of being gay.

“Before he was happy with his life and sexuality. He came out at 16 and was proud of himself but he completely changed after that attack and was never the same again.

“The attack stripped my son of who he was. He completely changed and wanted to die.

“He said he wished he was someone else so he could fit into society. I told him people are just cruel and he said he wasn’t strong enough to take it anymore.

“He survived the attack but my Tommy as I knew him died that day.

“Just before he killed himself he told me he wasn’t proud to be gay.”

In England and Wales, there were 17,135 reported hate crimes based on sexual orientation in 2020/21.

And Claire said: “Something really needs to change and more needs to be done. People can’t get away with homophobic attacks and there needs to be stricter sentencing.

“Some people think it’s acceptable but it’s a hate crime for a reason.”

Mum-of-four Claire said Tommy was a colourful character and the whole family was drawn to him.

She said: “If it was your birthday he would be the first to give you a hug. He was just so caring and tried so hard to make everyone around him happy.”

Tommy told his mum he was gay when he was 16.

She remembered: “He came home from school and told me. It wasn’t a surprise to anybody else but it was to me.

“I’m a bit naive. Tommy was really upset and said he only cared what I thought. I told him I really didn’t care about his sexuality and I loved him so much.”

Tommy’s dream was to work on a cruise ship and he studied travel and tourism in college.

But his hopes were destroyed when he was attacked at Dusk2Dawn nightclub in Maidstone in June 2015.

Nobody was charged because of a lack of evidence.

Claire said: “They called him a gay batty boy. I got to the hospital and part of his nose had been severed.

“The nurse told he was lucky to be alive because the stab wounds just missed his arteries.”

Tommy took an overdose weeks later and was referred for mental health support.

Claire said her boy suffered PTSD, a personality change, and became angry at the world.

She said: “He was open and told me he wasn’t the same in loving Tommy anymore who enjoyed being out and about.

“He could not understand why being gay would lead to something so awful.”

The pair then enjoyed a memorable holiday in Italy where Claire believed she saw a turning point in Tommy.

However, his mood spiralled after returning home and he spoke openly about suicide.

Claire said: “I told him things were getting on top of him and it would get better but he said he was tired and he kept saying it.”

Now, approaching the second anniversary, Claire said: “I genuinely can’t believe it’s been two years. I don’t get it. Sometimes if I sit and overthink it I go into a deep depression and won’t get out of bed.

“Other times I think he’s still alive and I think that’s because of the charity.”

It is a go-between for the patients and different health services.