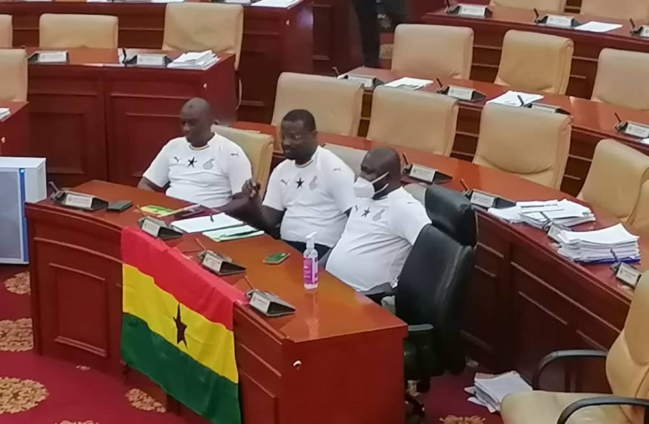 The fever surrounding the much anticipated West African derby seems to have found its way to Parliament.

Later tonight, the Black Stars are facing Nigeria’s Super Eagles in a bid to secure a place in the 2022 FIFA World Cup in Qatar.

On Friday, legislators, who had assembled to conduct the business of the day, were seen clad in the jerseys of the senior national team, the Black Stars, ahead of the clash.

First Deputy Speaker, Joseph Osei-Owusu, was not left out in ditching their official suits for the sports apparel.

The benches were also draped in national colours in a bid to heighten the spirit and boost morale.

Though the numbers on the floor were not enough, the legislators seemed rather excited for the prospects at the Baba Yara Sports Stadium.

The other MPs wished the Black Stars well in the upcoming encounter.

Tolon MP, Habib Iddrisu, acknowledged the relevance of the clash in the country’s sports calendar and urged the players to put their best foot forward.

He encouraged the country to rally behind the senior national team.

MP for Odododiodio, Nii Lante Vanderpuye, urged the team to redeem its image by winning against the Super Eagles.

Almost half the capacity of the Baba Yara stadium has already been sold online, according to the Ministry of Youth and Sports.

After the game, the team will be travelling four days later to Abuja for the second leg at the Moshood Abiola National Stadium.