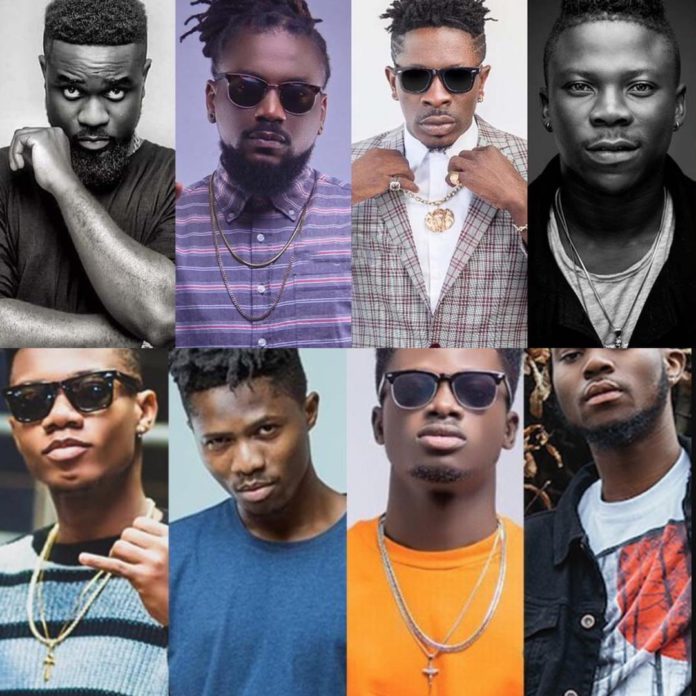 Ghana’s music industry has come a long way and it still has a long way to go but today we get to celebrate the strides local artistes have made in expanding their music catalogue.

This expansion has given room to a lot more new artistes and sometimes old talents to also shine in the industry.

Years ago, Ghana had a variety of artistes ruling the industry. From Highlife to burger highlife to contemporary highlife moving onto hiplife, reggae/dancehall and even Afrobeats. We had it all.

Music in the last decade

But as years went by, the music tastes expanded so much one would think breaking into the industry would have been an easy feat. The last decade saw Ghana hold on tightly to a number of artistes and closing off many others.

With a demand for a certain music style, it became tough for some young talents to break into the industry and subsequently make a name for themselves. This was mainly because we had a handful of artistes reigning the industry while others were given the back seat.

So, becoming huge household names when equally brilliant talented acts who were already in the industry were not hailed as much as the selected few was a difficult ride.

The era of the Ss

Not to say the selected were not talented. Quite the opposite, actually. In the past decade, Sarkodie, Stonebwoy, Samini and Shatta Wale captured the hearts of many Ghanaians with their talents and their willingness to explore genres of music beyond the ones they are known for.

Their music transcended the borders of Ghana earning them, and the country, some international accolades, features and awards including the MTV Africa Music Awards (MAMAs) and the BET Awards.

They have immense talents and still to this day continue to explore their artistry even better. This has fans increasingly falling more and more in love with them. Every up and coming artistes in that decade wanted to fall into a certain category of the Ss.

Who wouldn’t want to be when you could have a concert designed for you yearly. Either you are like them or beat them to succeed in the industry. This at the time was not an easy job to do – they set the bar really high.

But, with a narrowed view of Ghanaian music came a narrow catalogue of Ghanaian acts and talents. Thus, people found themselves listening to a lot more foreign music especially from Nigeria and the US.

Though the Ss were and still are good, there were a few other acts that had a unique touch in the industry.

They may not have had huge fan bases as the Ss but artistes like Efya, Castro, MzVee, R2Bees, M.anifest, Kwabena Kwabena E.L, VVIP, Joey B, Pappy Kojo, Kaakie, Edem and a few others treated Ghanaians to good music.

These artistes were treasured by the fans because they brought the diversity needed, however little, in Rap, Hiplife, Hiphop, Dancehall and Highlife that people were calling for.

Luckily, the power and influence they held, added to that of the Ss, kept Ghana music afloat so it would not drown in the many foreign music that had taken over the airwaves.

The era of the Ks

For a long while, even though some Ghanaians called out the lack of diversity in the industry, music lovers had their hooks in the Ss and the few others – and they seemed unwilling to let go.

Fortunately, with a cry for help came the need to open up and soften hearts to new talents. Thus, one lucky breakthrough brought a flood of talents that seemed to open the door of the industry for the much-needed growth and diversity.

Some new artistes started to break the status quo. They were tagged as the Four Ks in a 2019 article. In that article, the writer stated that these young men, Kuami Eugene, KiDi, King Promise and Kwesi Arthur, in barely two years after their names popped up, broke through the tight Ghana Music Industry and made their way to the forefront.

CEO of 3Music Networks, Sadiq Abdulai Abu, once said this about the artistes on Hitz FM: “Ghanaians wanted to see more than just a few acts dominate. They wanted a future for the Ghanaian music, so record labels worked hard to give them these talents.”

In the article published in February 2019, the young artistes were said to have a Midas touch. To be honest, that Midas characteristic can be seen a lot more now than before.

Check out songs they have released – Sika (King Promise), Say Cheese (KiDi), Show Body (Kuami Eugene) and Nobody (Kwesi Arthur) and ones they have been featured in like No Dulling, Blessing, Jealous and Door. BBC, in January 2021, also named KiDi as one of the 10 artistes in Africa people need to look out for.

It seems with the popularity of these four musicians came the eye opening decision to welcome as many artistes as possible to the industry. The young artistes who had wanted to make it into the industry, now had the chance to make it or say goodbye to the dream of being an artiste.

During the reign of the Ks, Ghana witnessed many other growths. The late Ebony became a sensation in Reggae/Dancehall, Medikal and Strongman’s 2019 beef propelled their growth and Wendy Shay took fans on a ride the moment she entered the industry.

Many of them have come a long way. Kelvyn Boy has proven he does not only have the talent but can also bring some great competition into the Reggae/Dancehall and Afrobeat genres which was previously owned by three of the Ss – Samini, Stonebwoy and Shatta Wale.

His T.I.M.E EP was a gateway to showing fans how he can take advantage of Highlife by infusing it into his songs to create distinct yet familiar Afrobeats tunes.

Akwaboah may not be new in the industry, however, music lovers are giving him more attention now. Many people are recognising he is an asset who has contributed to keeping Highlife music alive.

Highly Spiritual acts Mr Drew and Krymi have proved they are a duo ready to entertain people as long as they want. Fameye has gotten fans wrapped around his fingers with every new release. And more recently, the Kumerica craze has unearthed a lot more talents that are proving Ghana has the ability to sweep the world off its feet with our own style of music.

More importantly many Ghanaians have taken the initiative in the past few years to explore music, mostly ones they can resonate with on a deeper and personal level.

Many of these artistes have dabbled in alternative music that, even though may not be as popular as other sounds, captures the heart of many music lovers.

To date, people praise Ko-Jo Cue for his outstanding ‘For My Brothers’ album that makes you rethink your life choices, not in a way that condemns but consoles, advises and leaves you with the thought; ‘I am not alone.’

A year or two ago I would have said Worlasi is underrated but today, I say Ghanaian music lovers are gradually realizing he is a gem that needs to be treasured – and his 2019 album  Worla (The Man and The God) only scratches the surface of his geniusness.

Adoma’s vocals and her jazzy style is not music that has gained mainstream attention yet. But, the moment her music hits the ears it falsettos and vibrato sucks you in. So, it’s only a matter of time.

If you want vocals and music that make love to your ears then you may not want to miss you Amaarae’s ‘The Angel You Don’t Know’ album.

Some years ago, industry persons began an agenda to get radio stations to play 90% Ghanaian songs and 10% foreign. They argued that foreign songs had dominated the airwaves and their influence was having a negative impact on the industry.

Although the campaign was not successful all through and through, the campaign till this day continues to persist. However, after some observations, it is clear that Ghana radio stations are yet to institute the 90%-10% local content policy as advocated, but, there are a lot more Ghanaian songs on the airwaves than before.

This, I believe, can be attributed to the influx of new artistes. Music industries across the world thrive on fresh blood and compelling new content. New artistes means new content and new content often translates to more airplay. Now, there are a lot more songs in circulation than when just a few artistes were at the forefront and enjoyed massive rotation ahead of others.

The presence this many artistes has widened the music catalogues of music lovers across the country. Music lovers aren’t interested only in what a huge artiste is doing anymore, they are also looking out for the other artistes.

If people love what an artiste does, there is an agenda to push them and their craft. An example is Kofi Jamar, Black Sheriff, Asaka Boys and Gyakie, who now has a fan base in the nearly impenetrable Nigeria music market, even though she has not been in the industry as long as others.

These artistes have shown with their influences in Ghanaian music, they can join the Ss and other legends to catapult Ghanaian music to the continent and beyond.

Some people might be concerned that the increasing number of artistes could cause a fall in standards. However, music consumers have in many ways proved to be gatekeepers for quality content. It might not always be the case that only industry persons have the chance to check and determine quality.

The last few years have proved that Ghana can have as many artistes as it wants and there will still be space for more. This article scraps the surface of the artistes that are pushing through in the industry. Join me in subsequent writings where I highlight some artistes worth listening to.