The Egyptian forward’s existing deal was due to expire in 2023 with discussions over an extension appearing to reach an impasse, raising questions over his future.

However, the two parties appear to have reached an agreement with reports suggesting Salah, 30, will remain at Anfield until 2025.

“I feel great and [I am] excited to win trophies with the club. It’s a happy day for everyone,” Salah said.

“It takes a little bit of time, I think, to renew, but now everything is done so we just need to focus on what’s next.

“I think you can see in the last five or six years the team was always going [upwards]. Last season we were close to winning four, but unfortunately in the last week of the season we lost two trophies.

“I think we are in a good position to fight for everything. We have new signings as well. We just need to keep working hard, have a good vision, be positive and go for everything again.”

In the build-up to the announcement, there appeared to be some confusion on social media as the player’s agent Ramy Abbas Issa tweeted a ‘laughing’ emoji to which the official Liverpool account responded with a ‘facepalm’ emoji, while club legend Jamie Carragher described it as “cryptic cr*p”.

However, everything was cleared up when the club then posted a video with the player himself declaring “Salah stays”.

Salah arrived at the club in 2017 and has scored 156 goals in 254 appearances, helping the club to the Champions League in 2019 and the Premier League title a year later.

Last season, the Reds lifted both the Carabao and FA Cups, with Salah scoring 31 times in all competitions.

The news comes as a boost to Liverpool, who lost Sadio Mane to Bayern Munich earlier in the transfer window. 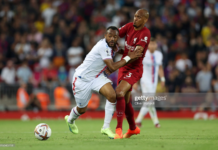