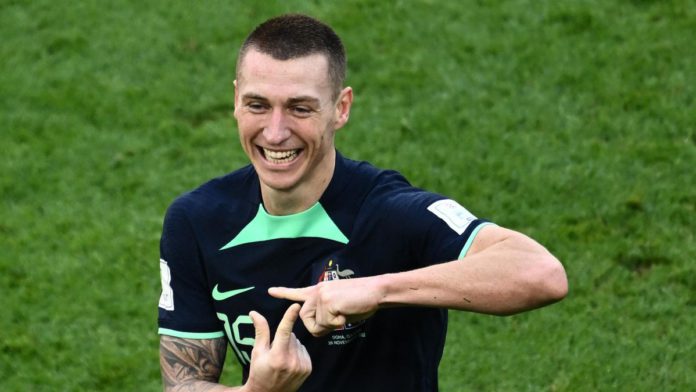 Australia secured their first win at a World Cup since 2010 to go second in Group D with a 1-0 triumph over Tunisia.

The Socceroos started well, dominating the ball and spent the majority of the first period in Tunisia’s half of the pitch. They were more vibrant than their opponents, popping the ball about with a confidence and swagger, with Aaron Mooy pulling the strings and keeping his side ticking over.

Australia found the breakthrough after 23 minutes, Goodwin’s cross was deflected and Mitchell Duke managed to head home a fantastic effort. A really well-worked goal and a superb headed finish.

And with good reason. Australia nearly made Tunisia pay on the break, with Mathew Leckie inches away from making it 2-0 after just failing to get on the end of a low fizzed cross.

The game lacked rhythm for large parts of the second period, lots of substitutions and stoppages disrupting the game much to Australia’s delight.

Tunisia finally decided to go for it in the last 10 minutes, pouring forward at every opportunity and looked as if they might grab an equaliser. In the end, it was too little too late for the North African side, who perhaps should have committed men forward earlier than they did to give themselves a greater chance of a result.

Ultimately, it was a fantastic win for Graham Arnold’s side who will be confident about their chances of progressing to the knockout stages. They face Denmark in the final game on November 30 knowing qualification is in their own hands.