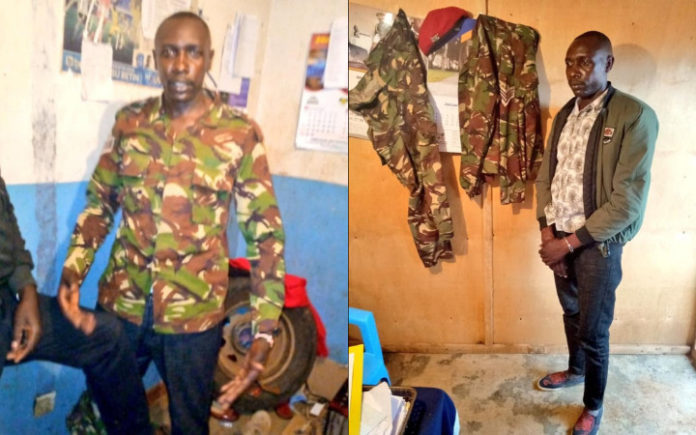 A Kenya Defense Force (KDF) impersonator who stormed a Police Station while dressed in a jungle jacket of a Military Police Sergeant and assaulted a policewoman has been arrested.

In a Tuesday, December 7 statement by the National Police Service (NPS), Kenya’s Inspector General of Police, Hillary Mutyambai, said George Onderi, 27, arrived at the station at around 9:00 pm and assaulted Constable Mary Maina who was seated at the Report Desk.

He is accused of dragging out Maina whom he faulted for wearing an ‘inappropriate’ jungle police uniform.

“He arrived at the station in his Toyota Belta car, parked and proceeded to confront the officer who was on duty at the report office desk on allegations that she wore a pair of uniform with the wrong jungle print,” Mutyambai said in the statement.

Referring to the female officer as an impersonator, Onderi violently pulled the her from her duty post which saw other officers intervene to find out what was wrong.

Asked to identify himself, Onderi refused totally, prompting the OCS Cephas Ombija to order that he be arrested.

“He is being held at the station as DCI officers are investigating to establish any connection to acts of criminality in the area. He will be arraigned for charges of Impersonation and Creating disturbance,” Mutyambai said.

According to the statement, the country has witnessed incidents where criminals have unlawfully used the identities of security officers.

“While we caution the public against imposters who are out to advance acts of fraud and other forms of criminality, we urge the public to seek services from designated security installations and, to report to authorities any suspected imposters,” he said.

3 arrested over Mamponteng clashes that left two in critical condition