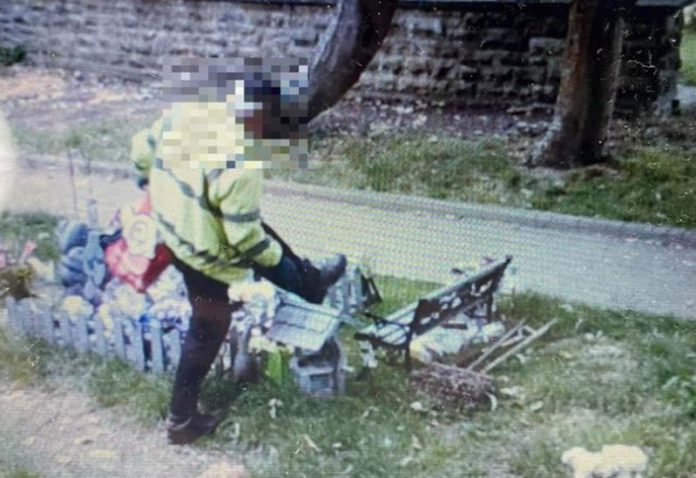 A grieving mum has been left disgusted after a “strange” man ransacked her dead baby’s grave and stole ornaments.

The man was caught on CCTV hanging around the grave of baby Kaison, reports Leeds Live.

It is not the first time Donna Varley has had to endure the vandalism of her little boy’s final resting place.

She had been visiting his grave in Morley, West Yorkshire when she saw it had been defaced by thieves earlier this week.

They had stolen a projector, which Donna had used to shine onto Kaison’s headstone. They also left pictures of her baby strewn all over the ground around his grave.

Now CCTV footage has been shared of the man Donna believes is responsible for all her recent heartaches.

“I think it’s the same man,” she said : “I’ve had a few people tell me they’ve seen him around the cemetery before acting stange and a bit odd.

“He took nine solar lights and a projector so he only left me with one light.

“It’s really upsetting and this is becoming a continuous thing now. I’ve got to the point where I feel like giving up and I shouldn’t have to feel like that when it comes to decorating my own son’s grave.”

Kaison passed away of mitochondrial disease, a rare chronic disorder on Easter Sunday last year at eight and a half months old.

Donna said: “I’d gone to visit Kaison, as I always go every night to say goodnight to him – I go every day, and every night, I don’t miss a day.

“But when I got there, my heart sunk. It was horrible, especially after last time, I was so shocked. I couldn’t understand why someone would steal from a grave.

“My son loved bright lights, so when he passed away I wanted his grave to be bright and beautiful just the way he would’ve loved it.

“I made it really colourful, and put a projector that projected light onto headstone and that’s what they stole and they moved the pictures.”

In September last year, £300 worth of damage was caused to the grave, but no culprits have been found.

She has also visited her son’s grave to find ornaments, flowers and lights missing on three other occasions.

Donna said: “I have got to the point where I think about what is going to be taken next.

“It’s like I cannot mourn my baby’s loss because I have to worry about what is going to be stolen from his grave.

The police have been informed about the latest vandalism and Donna wants to ensure it doesn’t happen again.