Former President John Dramani Mahama wants the public funding of the National Cathedral to be halted.

He insists that the construction is currently not a priority for the government, especially in the ongoing economic crunch.

According to him, a value-for-money audit of the project is crucial as it would “open the way for believers who wish to contribute to its construction.”

“The public funding of the national cathedral, particularly at this time, must stop. Being a Christian myself, and deeply appreciative of the centrality of God in nation building, I agree with most Ghanaians who believe that the project cannot constitute a top priority of government at this moment, warranting further injection of scarce public funds,” he posted on social media on Sunday.

In the post on Facebook, the former President explained that “because of the non-transparency of the processes and procurements associated with the project, I believe that the cathedral project should be subjected to a value for money audit in other to open the way for believers who wish to contribute to its construction to do so”.

The building of the Cathedral fulfils a pledge President Nana Akufo-Addo revealed he made to God before winning the 2016 elections.

In 2019, the Finance Minister, Ken Ofori-Atta, said the construction of the National Cathedral is estimated to cost over $100 million.

It has since been amended to $340 million.

The government has already demolished all structures on the proposed site to construct the National Cathedral at Ridge in Accra, and work is progressing.

It is also scheduled to be commissioned on March 6, 2024.

The 5,000-seater auditorium project will also bequeath to the country a gracious national park for all Ghanaians, bring new skills, technology and jobs, and act as a beacon to national, regional and international tourists. 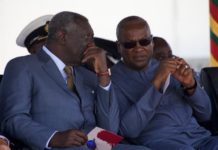