The National Association of Local Authorities of Ghana (NALAG) has said partisan politics already exists in the various Metropolitan, Municipal and District Assemblies (MMDAs) in the country.

According to the Administrator for NALAG, Andrews Bediako, the fear of some Ghanaians with respect to the district level elections becoming partisanship in nature has no basis.

Commenting on the issue in an interview on Adom Fm’s morning show Dwaso Nsem, Mr Bediako argued that because the district level elections are already partisan, the referendum would not be the instrument through which partisanship is introduced at the district level.

“In every assembly, the party of every member is known, the partisan nature of the assembly is already in existence,” he said.

The referendum will result in the amendment of Article 55(3), paving way for political parties’ participation in the district level election and consequently allowing the electorate to elect MMDAs at the local level. 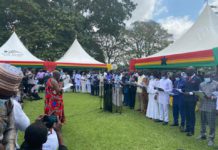