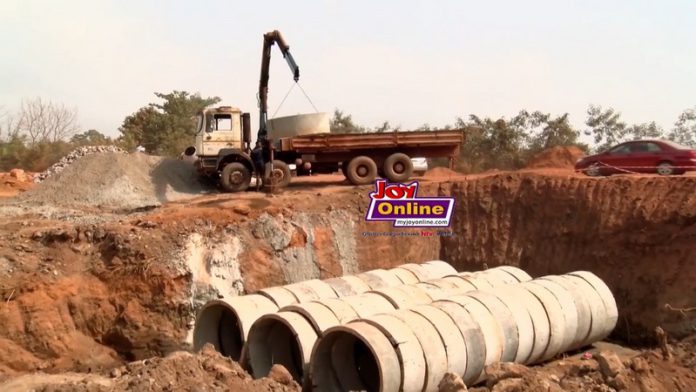 Chief of Kuntenanse in the Bosomtwe District of the Ashanti Region wants the President to ensure construction of the Kumasi-Bosomtwe road continues after his visit.

Construction of the road has stalled intermittently since it started in 2018 with contractors periodically abandoning the road.

Barima Amankwaah Adunan Ababio attested  to the return of the contractor in the past few days.

He says unless the necessary action is taken, the road contractors, Kofi Job Construction, will pack out.

“You awarded the road for construction in 2018, the contractor came in April 2019. The contractor comes on site for about a week and packs out. Today, I have seen his trucks parked along the road

On the second day of the President’s visit to the Ashanti Region, residents of Atwima Boko expressed their disatisfaction towards the stalling  of the Kwadaso-Trabuom road construction.

On the third day of the President’s visit, works at the Bosomtwe Road was inspected.

Construction trucks numbering about 20 were lined up on the road, a sign of active construction.

The road is largely not tarred making it dusty. It is almost not motorable in the raining season.

Bridges on the road are half way complete, making usage difficult.

Businesses along the road are on the verge of collapse due to excessive dust.

President Akufo-Addo, in a response, explained his government has made massive investments in roads in the Ashanti Region.

He, however, acknowledged financing for works is a problem.

“If you start every project from point zero and make progress to point four, it is difficult for people to notice. I came to meet point zero that’s why you are still complaining

“We can’t fix all at once due to financing but before I leave the presidency the road will be done,” the President said.

The 250-bed capacity hospital at Sewua is 95 percent complete.

Contractors Euroget D’Invest are committed to handing over the site in November.

They say access to utility and poor road connection to the hospital hinder completion.