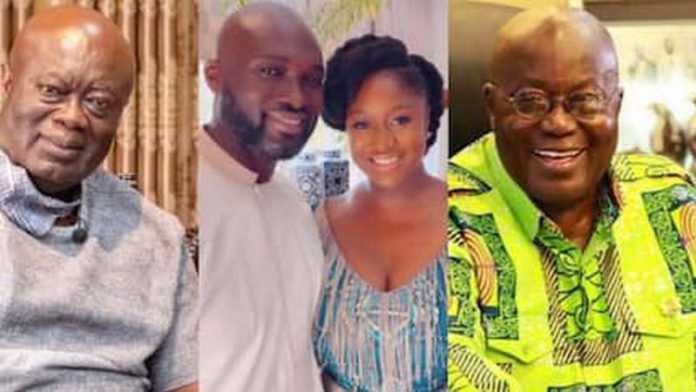 The Chief Executive of GIHOC Distilleries has recounted the pivotal role former President John Agyekum Kufuor played in the marriage ceremony between President Akufo-Addo’s daughter and his son.

Michael Kofi Jumah, in an interview on Accra-based Okay FM, said the former President volunteered to be the father figure to ask for the hand of the President’s daughter.

According to him, he did not hesitate to hand over that responsibility to his best friend, who is also a god-father to his son, Kwabena Jumah.

“I have a close relationship with President Kufuor, so he knows my son very well. Once we told him about the marriage, he agreed to lead my son to the in-law’s house.

“So, I’m not the one who took my son to President Akufo-Addo; it was former President Kufuor who led him and spoke to the President that ‘this is my grandson and I’m bringing him to your family’,” he narrated.

Edwina Nana Dokua Akufo-Addo and Kwabena Jumah tied the knot over the weekend in a private ceremony.

Touching on the genesis of the couple’s relationship, the leading New Patriotic Party (NPP) member said the two first met in the United States of America, where they got acquainted.

He indicated that at the time, neither his son nor Edwina Akufo-Addo was aware of each other’s background.

“It took a while before they both realized that their parents were political figures who subscribed to the NPP ideology,” he said.

Mr Jumah also stated that due to the nature of the country’s politics and his respect for the couple, he decided not to involve himself in their union actively.

“The children used to visit the presidency. They often went there, but I took myself out because I wanted to give them that respect as adults.

“Whenever the family called me, I chose not to participate because I didn’t want people to drag the president in it,” he said.

The luxurious wedding is reported to have been held at the Presidential Villa.

In some viral videos and pictures, the groom’s father, who is also a leading member of the New Patriotic Party (NPP), adorned kente.

Being a proud father of the bride, the President wore a white long-sleeved shirt with black trousers to the ceremony to be part of his daughter’s special day.

First Lady Rebecca Akufo-Addo was also seen in an all-white kaftan dress at the ceremony.

The Vice President, Dr Mahamudu Bawumia and his wife Samira Bawumia and other bigwigs of the NPP also graced the ceremony.