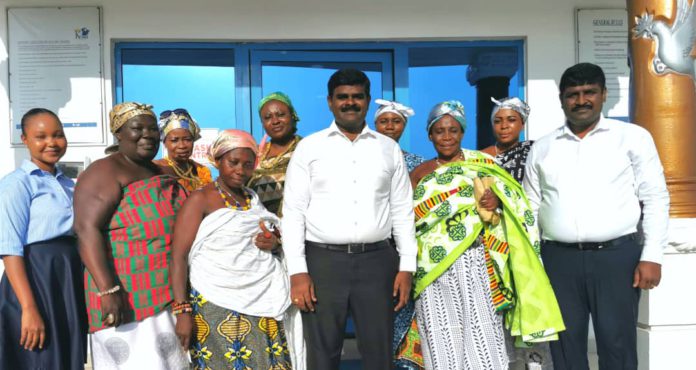 With the identification of over 4,098 flashpoints by the Ghana Police Service ahead of the December elections, the National Queen Mothers Foundation has rolled a peace plan.

The Foundation has taken it upon themselves to propagate the gospel of Peace to a number of communities.

Under the auspices of the “I Pledge Peace Campaign” the Queen Mother’s Foundation are engaging people in selected communities to educate them about the need to have a peaceful election.

To get support for their activities, the Foundation paid a courtesy call on the Kingdom Exim Group of Companies where they appealed for their support.

As a result, the company made an undisclosed cash donation in support of the peace campaign.

The Chief Executive Officer and Managing Director of Kingdom Group of Companies, Mr James Rajamani and Mr Immanuel Rajamani, respectively as well as the General Executive Manager of Kingdom Exim Group – Mrs Iftin Arthur-Afari hosted representatives of the Queen Mother’s in their office in Tema where the donation was made.

The president of the National Queen Mothers Foundation of Ghana, Nana Serwaa Bonsu underscored the need for peace, saying it was vital for the nation’s development.

She explained that it was as a result of that need that they have decided to engage in the campaign.

Nana Serwaa Bonsu thanked the Kingdom Exim executives for contributing towards peace in the country by making their donation to them.