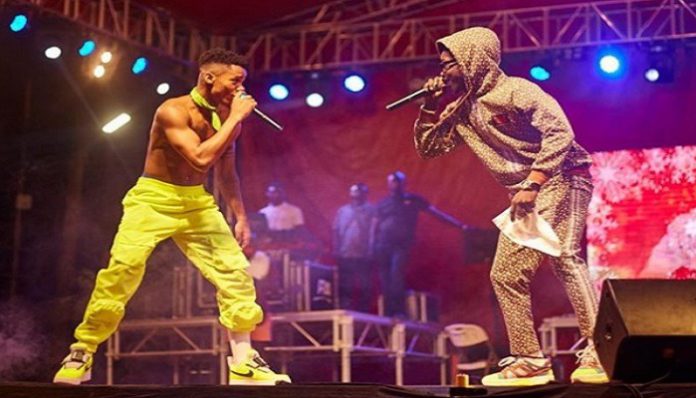 Signees of Lynx Entertainment, KiDi and Kuami Eugene made Ghana proud on her 65th birthday after a sold-out show in Indigo, 02 Arena in London, the first of its kind.

Their Live In Concert, a joint musical project, saw about 2,800 persons gather to experience their quality tunes.

The duo corrected the notion that no Ghanaian artiste can fill up the Indigo arena, and has brought hope to A-listed artistes to make efforts to fill the main 02 stadium Arena.

What started on a soothing note soon metamorphosed into a full blown fun-packed event, as screams and jubilations filled the auditorium.

KiDi performed his globally rated song, Touch It, while Kuami Eugene controlled the crowd with Fire Fire, among other songs.

After performing their songs back-to-back, the opportunity was handed to other artistes to entertain the crowd.

Stonebwoy, who was already in London for his performance with Davido at the latter’s concert, represented Ashaiman and showed up on stage to surprise the Lynx boys.

Kwabena Kwabena proved why he deserves to be in the legendary list when he got the crowd going gaga with some indigenous Highlife music.

The patrons prevented him from exiting the stage, as he was forced to perform a medley of his songs.

International award-winning artiste, Sarkodie, attracted roars as the hosts and fans did not expect him in London, even so, on the stage of the concert.

He did what he knows how to do best; sing until patrons experienced goosebumps with his impeccable flow and delivery.

The legacy of the last Castro was preserved when Sarkodie performed their collaboration, Adonai, which is the most watched Ghanaian video on Youtube with over 85 million views.

The crowd did not disappoint as they sang word-for-word all songs that were introduced on stage and they contributed immensely to the shut-down show.

Ghanaians, who could not make it to London to support the artistes, have appreciated their craft via social media engagements.

A hashtag #KiDiKuamiEugeneIndigo has been generated and populated with tweets such that it has pegged number one on the trend chart.