Lorenzo Insigne’s first-half penalty proved decisive as Napoli put a huge dent in Juventus’ hopes of a 10th consecutive Serie A title and eased the pressure on Gennaro Gattuso.

Gattuso’s under fire side started the game in sixth and were missing a number of key players including Dries Mertens and Kalidou Koulibaly for a daunting match against Juventus, who had won nine of their last 11 games in all competitions.

But the hosts took a surprise lead into the break courtesy of Insigne’s penalty, awarded after Giorgio Chiellini – making his 400th Serie A appearance and his 500th Juve start – caught Amir Rrahmani with a hand to the face. It was Insigne’s 100th goal in Napoli colours and helped make amends for three previous penalty misses against the Old Lady.

Juventus rallied in search of an equaliser after the restart but without reward – largely thanks to Napoli’s stand-in goalkeeper Alex Meret, who replaced David Ospina after he suffered an injury during the warm-up.

The 23-year-old was excellent as he repelled threatening efforts from Federico Chisea and Alvaro Morata. When he was beaten by the latter, the offside flag came to Napoli’s rescue, as Gattuso’s men held on against Cristiano Ronaldo and co for what could be a huge victory in their season.

The result sees Napoli move into fourth, closing the gap on third-placed Juventus to just two points, with Andrea Pirlo’s side remaining seven points adrift of leaders AC Milan ahead of their away game against Spezia later on Saturday. 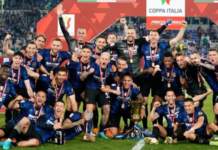 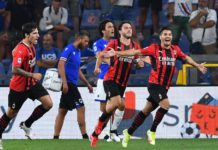 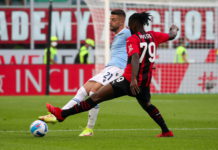