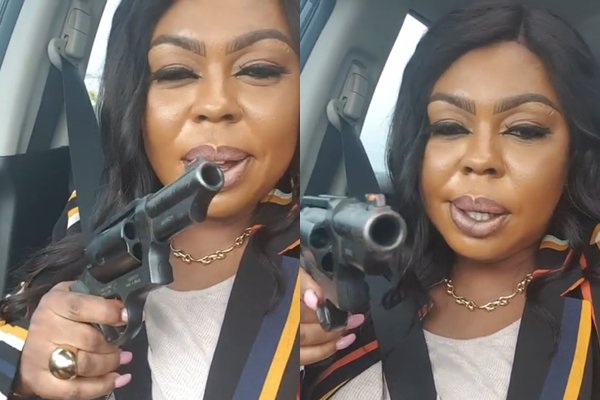 Information reaching adomonline.com has it that, Valentina Nana Agyeiwaa, popularly known as Afia Schwarzenegger, has been arrested by men of the Ghana Police Service.

Our sources at the Police Service Headquarters have revealed to us that the loud-mouthed television personality and actress is currently in the custody of the police.

Her arrest was caused by Chief Executive Officer (CEO) of P-Mobile, Mr Phillip Brobbey, who had accused her of defamation.

Meanwhile, further information suggests she has also been served with writ of summons by lawyers for Mr Brobbey.

Below is photo of Afia Schwarzenegger at the Ghana Police headquarters:

According to a source who was at the police headquarters to see Afia in custody, the actress’ arrest is as a result of his constant hide-and-seek game with the police since she was invited about a week or more ago.

Afia, at a point, allegedly told the police that she was a delegate in the just-ended New Patriotic Party Parliamentary Primaries hence her inability to honour the police invitation.

But, days after the primary, she still failed to make an appearance, forcing law enforcement authorities to arrest her for some questioning.

Afia Schwarzenegger has been dragged to court over a defamatory statement she made on Instagram about the telecommunication company and its CEO.

According to a writ by an Accra High Court that has been copied to adomonline.com, Afia is being held for damaging statements against Brobbey and his company despite the latter fulfilling a contractual obligation his company had signed with Afia as brand ambassador in 2018.

The writ is demanding ‘aggravated or exemplary damages in the sum of GHS 500,000 plus publication of retraction across Afia’s social media pages. She has also been given a restraining order against making such defamatory remarks about Brobbey and his company in the future

Note: This story is undergoing constant update as more information is being added in real time.